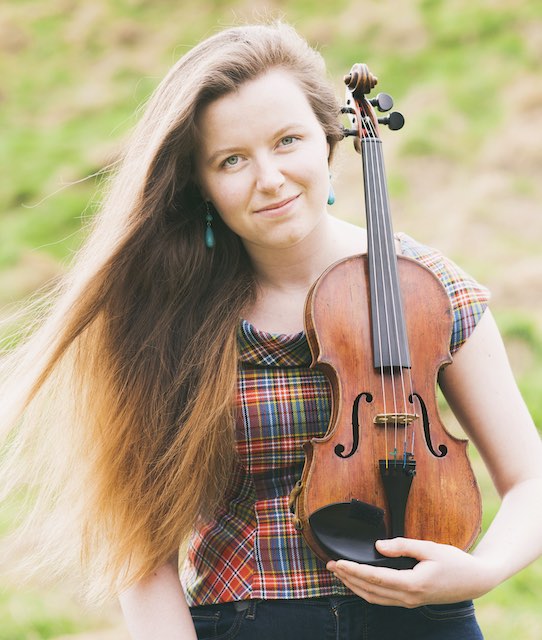 The single is written to show her gratitude for the connections and mental wellbeing that music has given her, and so many others, during the Covid-19 pandemic.

Most recognised as a fiddle player, Cannot Steal the Sound is Isla’s first body of work that features her as a solo singer.

Isla was inspired to write the new material while taking part in Ondervinden’s project The Folk Effect – an online event spread over six days where five musicians each wrote a song in 24 hours that was directly inspired by the song created by one of their peers the day before.

Taking inspiration from Glasgow alt.pop outfit Rambootan’s self-penned song Little Beacons that they had written the day previously, Isla embarked on her own solo writing journey to create a song in the space of a day.

Featuring just herself on vocals, fiddle and piano, Isla Ratcliff’s highly anticipated and self-composed debut single showcases the creativity that can spark from sharing music with fellow artists, albeit virtually.

“This song is one of the quickest and most instinctive pieces of music I’ve ever written.

“The inspiration came from the realisation that music has helped a lot of people to cope during lockdown, myself included.

“I have listened to numerous albums.

“I have learned to play new repertoire.

“I have watched online concerts and music festivals.

“I have collaborated with musicians from around the world and I have continued to teach my violin and fiddle students online.

“I have played piano duets with my elderly granny, whose dementia worsened during lockdown, yet she remembers how to play many Scottish tunes.

“During a very difficult year, music has served an important function as a medium that takes us away from our immediate reality and connects us to each other, albeit virtually.

“Music has provided an escape into a more cheerful world, and for this I am very grateful.”

With the subject of Cannot Steal The Sound being so current, Isla didn’t want lockdown restrictions to delay the release of her track.

This resulted in Isla returning to her childhood and building a duvet fort to record her vocals and fiddle parts, while recording piano on her late grandfather’s piano in her family living room.

Growing up immersed in music, Isla learned violin from the age of five and quickly gained an abundance of writing and performing experience, notably performing a duet with Nicola Benedetti at Edinburgh Usher Hall when she was just 13 years old.

Growing up in Edinburgh, Isla studied at the City of Edinburgh Music School up until the age of 17.

Now a seasoned performer with two music degrees from Royal Conservatoire of Scotland and Oxford University under her belt, Isla Ratcliff is a versatile musician, composer and arranger.

Continually inspired by the intersection between music and society, Isla wrote her dissertation on the role of music in the Scottish independence referendum debate.

She performed with the Royal Conservatoire of Scotland at the 20th Anniversary of the Scottish Parliament in 2019, is an alumna of the National Youth Orchestra of Scotland and also plays with Stramash Cèilidh Band.

Cannot Steal The Sound was commissioned by Ondervinden, composed and arranged by Isla Ratcliff and mixed and mastered by Al James. Cover artwork was created by Nina Klaff.

Cannot Steal The Sound will be available to download and stream on Isla’s Bandcamp and all of the usual streaming and downloading sites.