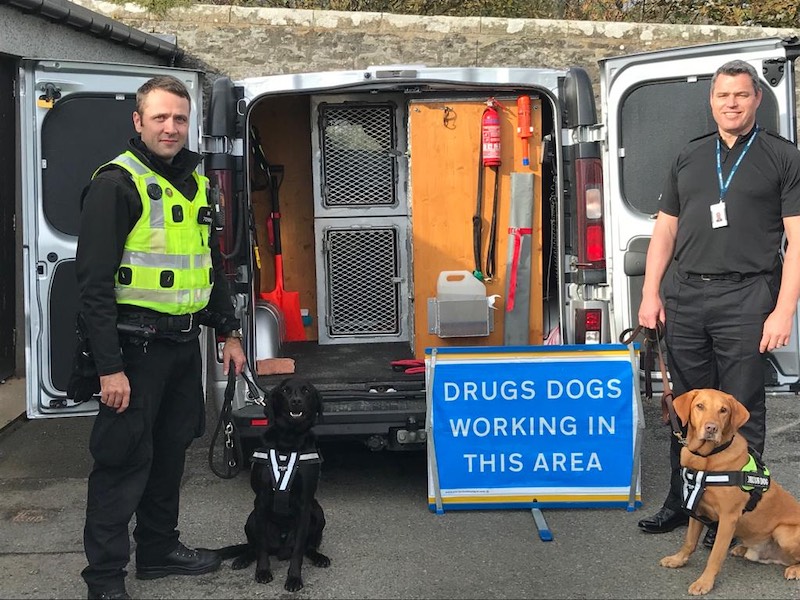 A new drugs detection dog has come to live and work on Shetland.

Two-year-old black Labrador Oscar started his operational career on the mainland with Police Scotland’s dog unit, and was recently transferred to the Islands where he now will work from Lerwick Police Station alongside his new handler, Special Constable (SPC) Ewan Anderson.

Oscar takes over from ten-year-old fox red Labrador, Blade, as he nears his retirement.

Shetland’s drugs dogs are operated by local charity Dogs Against Drugs, which was established in 2001.

The charity has a unique partnership with Police Scotland and has provided two handlers for a number of years – SPC Michael Coutts who has 18 years’ service and SPC Anderson who has nine.

The dual role means they can carry out their duties alongside regular Police officers, detecting and deterring illegal drugs from entering and being used on the island, and ultimately helping to reduce and tackle crime.

As well as providing vital support to Police Scotland, the charity also delivers drugs education to all age ranges of pupils in local schools, and is actively involved in giving drugs awareness training to businesses and individuals all over the island.

The model has proved such a success that a similar initiative has now been launched in Orkney.

“I would like to thank the Police Scotland Dog Unit for donating Oscar to Shetland and we welcome him as a strong and valuable addition to our organisation.

“I am sure that Oscar and Ewan will have an excellent partnership and prove as successful as his last partnership with Blade.”

“I look forward to introducing Oscar to the community and continuing our important work.”

Highlands & Islands Chief Superintendent Conrad Trickett visited the island recently as he continues his tour of the region as new Divisional Commander.

At Lerwick Police Station, he met with SPC Anderson, Oscar and Blade, where he got the chance to thank them in person.

“Both SPC Anderson and SPC Coutts have made a significant impact to Shetland with their dedication to both their roles.

“Their commitment and drive are exemplary, and I can say with some certainty that Shetland is a safer place to live thanks to them both and their trusted dogs.

“I would like to take this opportunity to congratulate them on their service to date.”