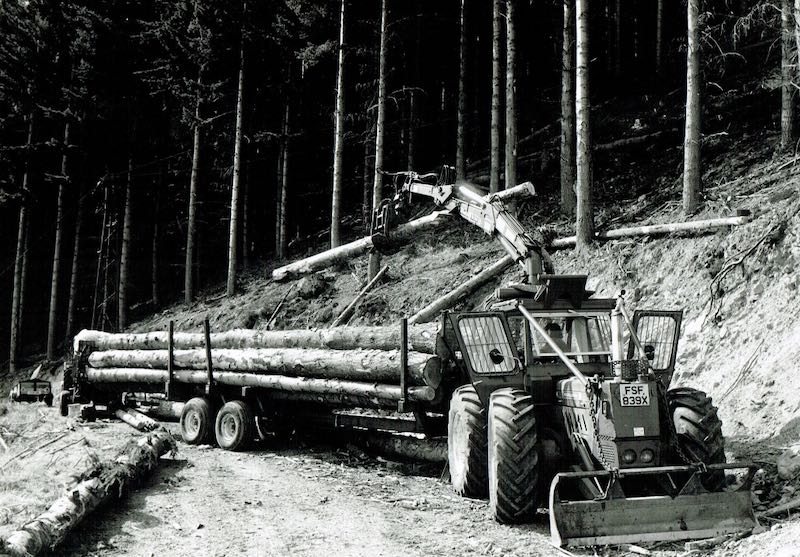 Forestry and Land Scotland’s Steep Ground Felling Programme along the A82 is the most technically challenging timber harvesting in Britain.

Carried out on dangerously steep slopes immediately beside a major trunk road and key utilities, the operation makes full use of state-of-the art machinery and safety measures.

It is a considerable advance on how things had to be done forty years ago, when foresters became aware of the need to fell trees on steep ground near ‘at risk’ locations.

Back in 1981 when the project began to take shape, neither the equipment nor the techniques were available.

Working at Altsaigh, Inchnacardoch, forester, Jim Pratt (retired 2002) and his team had to devise, refine and use a method of felling that would safely fell 1000 Douglas Fir on a site the like of which had not been attempted before.

“I am delighted to see the advances which have been made in the technology and safety of this most challenging of operations.

“When we first looked at how to do this we asked other foresters for advice.

“All they said was that it looked like a fearsome job that they had no idea how to tackle and wished us the best of luck!

“We had none of the equipment available today in terms of timber handling, and we were dealing with a species far more brittle that Sitka spruce.

“But we did have an incredible group of willing colleagues – I think, the best in Britain – who were determined to work together to figure out a way of removing the trees from these steep sites.

“We had the imagination and freedom to try things out and develop a way of working, which probably wouldn’t be allowed in today’s world.

“Key to the success was the control of traffic on the A82 below the site.

“All staff were fitted with throat mikes, mobile radio sets  and headphones in their earmuffs and so could contact the two traffic controllers whenever there was a need to stop the traffic. ”

Facing an inherently dangerous task, safety was paramount for Jim and his team.

To bring that element of risk in to sharp focus the men were paid a salary (rather than piecework) with the stipulation that safety was not to be compromised in any way.

The team was so committed to the task at hand that they undertook to work nine days out of ten, a demanding schedule that required intense concentration at all times.

The team had no specialised machinery to assist them other than an James Jones Alp Cat winch and Highland Bear forwarder with extended trailer and they had to contend with the differing qualities of tree species, which can affect how the tree behaves when it is being harvested.

For example, Douglas Fir has less elasticity so can shatter when it hits the ground.

In the event of a Douglas Fir ‘going rogue’ and starting a downhill slide, it will also shed branches and bark easily and gather momentum as it slides.

Some of the felling techniques developed also required exceptional concentration and skill.

Contour Felling, developed to deal with Norway spruce on a steep slope, involved felling a tree but leaving it connected to the stump until its branches had been removed.

The link to the stump was then cut and the stem allowed to roll downhill on wooden bearers, to be caught by a row of stopper trees and then winched out of the site.

The Altsaigh Douglas Fir were too large to be felled ‘on the hinge’ so before making their cuts, the foresters had to take into account – and compensate for – the wider diameter of the stems at the base, so that when the stems rolled downhill they ended up parallel to the line of stopper trees.

The high level of risk and the dangers of the job were made clear when, not long after Jim left the team, a forester was killed when struck by the top of a tree that had been dislodged by the one he was felling.

“The level of skill was phenomenal and the dangers the team faced were significant.

“I remember very clearly being shocked that, in their prime and working in appalling conditions, these men were working for a wage that was less than a retired gardener in the south of England would expect.

“I am very pleased to see how far things have moved on since those early days.

“The equipment available is a huge leap forward and while it has made some aspects of the job easier, it has not seen any lessening of the emphasis on safety – either that of the people on site or that of the public.

“Tackling these steep sites will always be challenging and dangerous work.

“Seeing the foresters of today making good headway with this long-term programme of work makes me immensely proud of the ground-breaking contribution that my colleagues and I made over forty years ago to this uniquely demanding aspect of forestry.”