Temporary Lane Closures on The A9 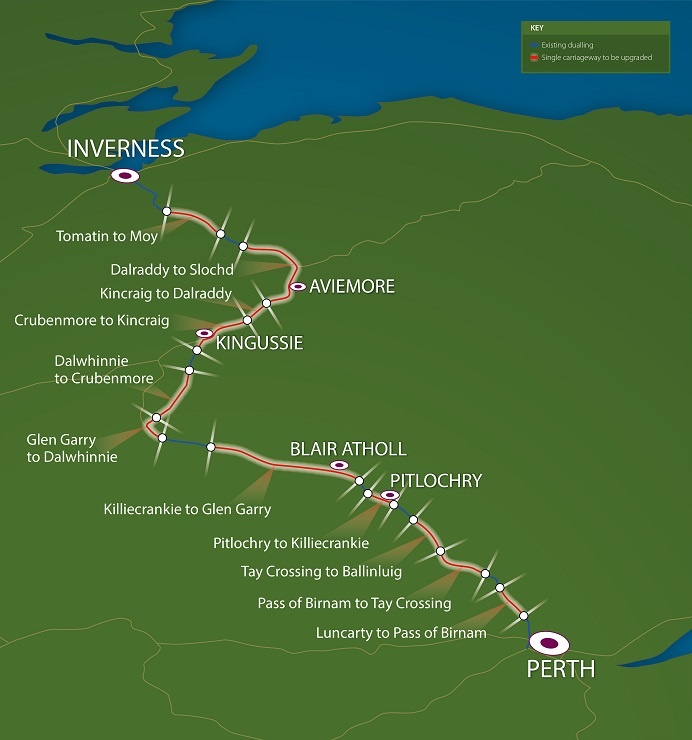 Transport Scotland is advising A9 road users to drive with extra care on the A9 between Findhorn Viaduct and Slochd over the next 11 weeks.

Road users are advised that temporary traffic management involving single lane closures on the existing dual carriageway will be implemented on various dates for the next 11 weeks, commencing today, Monday 10 October 2022.

These lane closures are required to facilitate the safe construction of new Intelligent Transport System infrastructure, including a new Variable Messaging Sign (VMS) on approach to the Findhorn Viaduct, as part of the A9 Dualling: Tomatin to Moy project. Layby 157 will be closed for the duration of these works.

All lane closures will be implemented on dual carriageway, with only one lane on the carriageway closed at a time to reduce  disruption to traffic flow on the A9.

Road users are being advised to allow additional time for their journey and take care on approach.

The lane closures will take place as follows:

10 October until 31 October: Lane 1 closure will run from south of layby 157 to north of the Findhorn Viaduct.

7 November until 26 November: the above Lane 1 closure will be extended north to the end of dual carriageway at Tomatin.

24 October: 1 day Lane 1 closure from north of layby 152 to the end of dual carriageway at Slochd Summit.

23 November until 23 December: Lane 1 closure from north of layby 152 to the end of dual carriageway at Slochd Summit. This will include a closure of layby 152.

Traffic management will be in operation all hours Monday to Sunday.

Road users are encouraged to plan ahead and check Traffic Scotland website prior to travelling on these days.

Please note, the planned works are weather dependent and may be cancelled or rescheduled if weather conditions are not favourable.

For further information on the A9 Dualling: Tomatin to Moy forthcoming traffic management visit the Transport Scotland website pages.