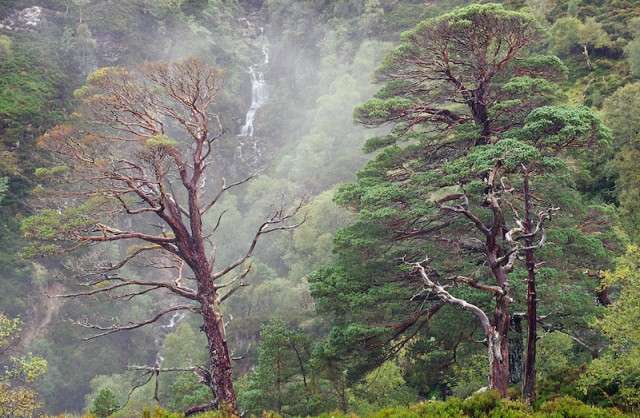 Comparing old and new aerial images, NatureScot staff calculated an increase of woodland cover from 158ha to 223ha since Beinn Eighe was designated as the UK’s first NNR in 1951.

This expanded woodland has created ‘corridors’ connecting the ancient fragments of woodland, allowing animals to move more freely and expand the range of rare woodland plants.

Most of this expansion is due to tree planting, with trees planted almost every year since 1951 and recently over 20,000 planted a year.

Since the NNR’s establishment, about 800,000 trees have been planted.

Most have been Scots pine as well as broadleaf species such as birch, aspen, holly, rowan and oak.

To retain the local provenance and genetic interest of the trees, all the seed is collected on the nature reserve and grown in an onsite tree nursery.

This year, the main planting phase will end with the last 20,000 trees planted.

In future years, natural regeneration will help expand the woodland further, and NatureScot will only use targeted planting for under-represented species in areas where there is no seed source.

Woodland expansion is part of the solution to the climate emergency, helping to increase biodiversity, conserve Scottish species and help our society and economy adapt to climate change, for example by reducing potential for flooding and reducing the effects of heatwaves.

“The planted woodlands now link together all the fragments of ancient woodland on the nature reserve, creating a much more resilient environment for wildlife and to help combat climate change.

“For the next 70 years, our vision is to see the wood expand even more through natural processes, with a flourishing western pinewood supporting a range of healthy habitats and a rich variety of species.”

Due to the local oceanic climate, the woodlands at Beinn Eighe are classed as temperate rainforest, which is a very rare habitat globally.

The high rainfall (about 2000mm annually), high humidity, relatively mild winters and cool summers create conditions ideal for many globally important mosses and liverworts, as well as a spectacular array of lichens, fungi and ferns.

NatureScot staff has also created a Story Map to vividly show the vital work which has taken place on Beinn Eighe over the last 70 years.