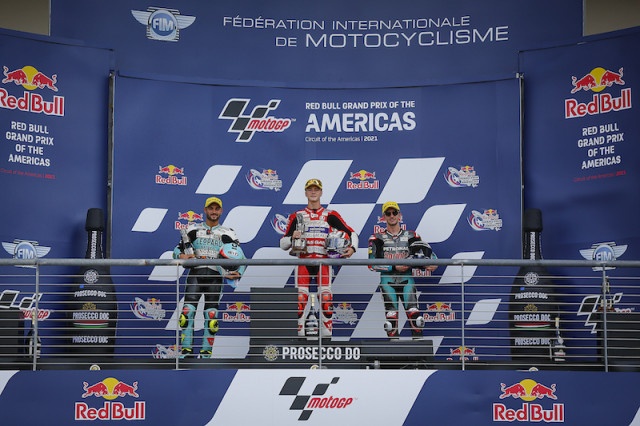 The Scot stood on the podium for the first time this year along with Foggia second and the race winner Guevara.

After a dramatic morning for the Moto3™ class at the Red Bull Grand Prix of the Americas, Izan Guevara (Solunion GASGAS Aspar Team) emerged victorious for his maiden World Championship win.

Öncü, however, was given a two-race suspension for the incident and will sit out the Emilia-Romagna and Algarve GPs.

As 2/3 of the race distance was not completed when that second Red Flag was brought out and there was no further restart, the first start is taken as the race result and full points awarded accordingly – with Guevara earning his first 25 after steaming away at the front.

Jaume Masia (Red Bull KTM Ajo) took the holeshot before Xavier Artigas (Leopard Racing) attacked for the lead, but the rookie had just jumped the start and was given a double Long Lap Penalty.

As he peeled off it was Guevara up into second ahead of Masia and Alcoba, with Dennis Foggia (Leopard Racing) on the chase in fourth.

From there, Guevara barely looked back.

The rookie and reigning FIM Moto3™ Junior World Champion was on rails and managed to stay ahead of the chasing pack, but they, in turn, didn’t manage to stay ahead of Foggia and those on the Italian’s tail.

John McPhee (Petronas Sprinta Racing) was up into the mix and before long it was Guevara the rookie ahead of the veteran duo of Foggia and McPhee.

The crash for Salač then brought out the first Red Flag, the Czech rider falling alone and then taken to hospital for a full check-up, and the restart was set for a five-lap sprint.

Guevara was away in the lead again as the lights went out, but then heartbreak seemed to strike for the number 28 as a technical problem took him out the lead.

However, the back straight then saw Öncü make contact with Alcoba and the Spaniard go down, with Migno and Acosta caught up in the avoiding action.

The Red Flag was immediately redeployed, and it was announced there would be no second restart, with the results taken from the first initial race.

That added to the emotional rollercoaster for Guevara and he was pronounced victorious, having led for much of the action anyway, and the rookie takes his first win – ahead of Foggia and McPhee as the two charged up the field early.

Masia just missed out on the podium and takes P4, with Öncü and Alcoba classified P5 and P6 as they were in the first start.

Binder takes seventh and Acosta is eighth – which sees Foggia gain a big chunk of points and the gap come down to 30 between the top two in the Championship.