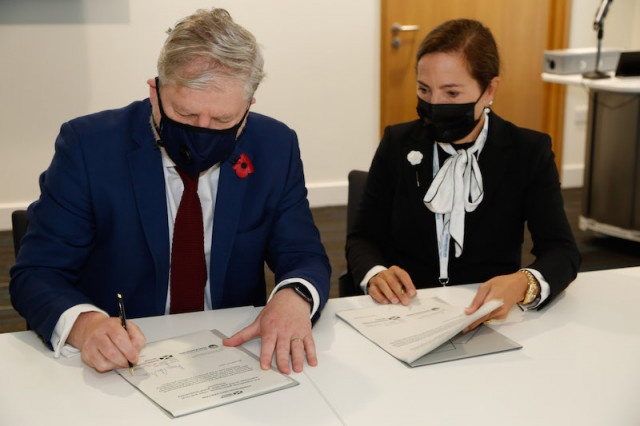 Bilateral meeting and signing of Edinburgh Agreement-AR and EK

Governments and cities encouraged to take action for nature at COP26.

California has become the first US state to sign Scotland’s Edinburgh Declaration, which commits devolved bodies and administrations around the world to take transformative action to protect nature and halt biodiversity loss around the globe.

Through its leadership of the ‘Edinburgh Process’, the Scottish Government has mobilised a global network of almost 200 governments, cities and local authorities to agree a set of shared commitments for nature over the next decade.

This comes ahead of the UN Convention on Biological Diversity (CBD) Conference of Parties (COP15) meeting in Kunming, China next April, where a new global biodiversity framework will be agreed.

California joins the city of Paris, Sao Paulo and Tokyo as the latest signatory.

“The Scottish Government was one of the first to recognise the twin crises of nature and climate – and we are calling for global transformative action, as well as acting here at home.

“The support and influence of governments like California, and ourselves, will be critical to ensuring the goals and targets set out in the global biodiversity framework are achieved.

“I would encourage governments of all levels, including cities and local authorities, from around the world to take action for nature and sign the Edinburgh Declaration – and here at COP26 is the ideal opportunity to do so.

“This is a crucial turning point in our history for tackling climate change and protecting biodiversity – and Scotland is at the heart of both.

“We are working to build commitment among governments around the world to raise the ambition at next year’s COP15 international biodiversity summit, in line with our own goal to halt the ongoing loss of nature by 2030, and restoring nature by 2045.”

“The nature crisis is real.

“We must move faster and on multiple fronts to address the joint crises of climate change and biodiversity loss.

“I am proud to sign the Edinburgh Declaration on behalf of Californians and our strong commitment to this global effort.

“As a subnational party with 40 million people to protect, 105 million acres we rely on for food, water, and habitat, and the fifth largest economy in the world to sustain, we understand what is at stake.

“There is no future in business as usual.”