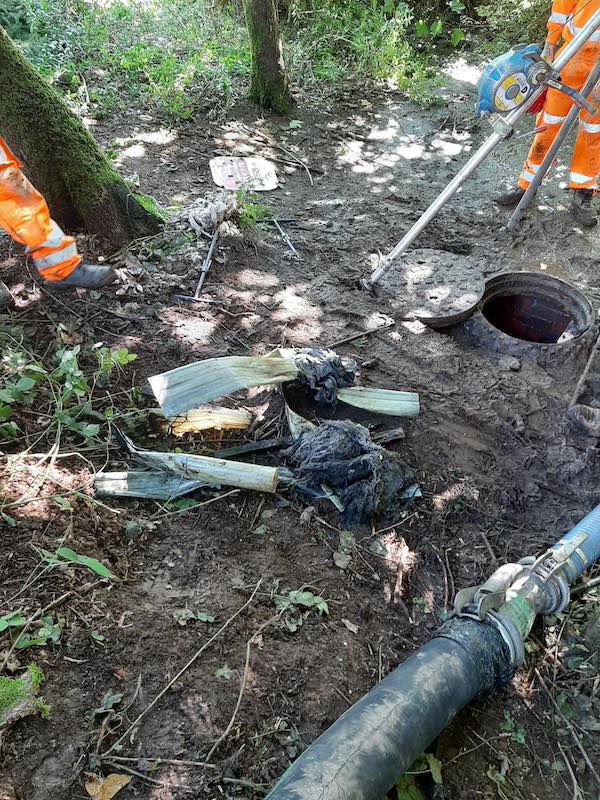 Scottish Water’s sewer response team was shocked to discover a sewer blocked with a number of tree protector tubes in East Renfrewshire.

The suspected vandalism caused an environmental incident in Newton Mearns, with sewage spilling into the Capelrig Burn which runs through Rouken Glen Park.

Scottish Water workers were called to investigate and were horrified to find the discarded tree tubes, thought to have been pulled from nearby trees and stuffed down the sewer network.

Prior to investigations being carried out, measures were put in place to ensure any impact on the local environment was kept to a minimum and the Scottish Environment Protection Agency (SEPA) was informed.

“This senseless act of vandalism ultimately led to the local environment being harmed – ironic really, given that the main purpose of them was actually to help the environment flourish.

“The blockage caused serious implications for our sewer network which was overwhelmed at this point and unable to cope with the build-up of waste water.

“Naturally, the sewer pipe burst causing a discharge of waste water into the burn.

“It’s frustrating to think that this would never have happened had the tubes not been put down the sewer in the first place.

“Time and resources were wasted and the environment was negatively impacted.

“Here at Scottish Water, we work hard all year round and invest heavily in our waste infrastructure to ensure we can provide waste water services in a manner that’s respectful of our environment.

“We urge everyone to do the right thing and help protect nature.”

Scottish Water’s Nature Calls campaign urges everyone to play an important role in helping to protect the environment.

In particular, it asks everyone to think twice before flushing anything other than pee, poo and toilet paper down the waste water network.

All other items, including wipes, should go in the bin.

Each year water companies spend millions of pounds responding to and resolving problems caused by the disposal of inappropriate materials into the sewer network.

While this is an extreme example of inappropriate items being put into the waste water system, Scottish Water deals with over 36,000 blockages a year at a cost to customers of £7 million.

It’s an unnecessary drain on resources and completely preventable if people follow the advice to only flush the 3Ps – pee, poo and toilet paper.

Visit JoinTheWave.Scot to find out more about the Nature Calls campaign, including downloadable campaign assets and videos.

Here, people can also ‘back the ban’ – Scottish Water is calling for a ban on wipes that contain plastic.

Several large retailers such as Tesco and Boots have since announced they are removing wipes made with plastic from their shelves.