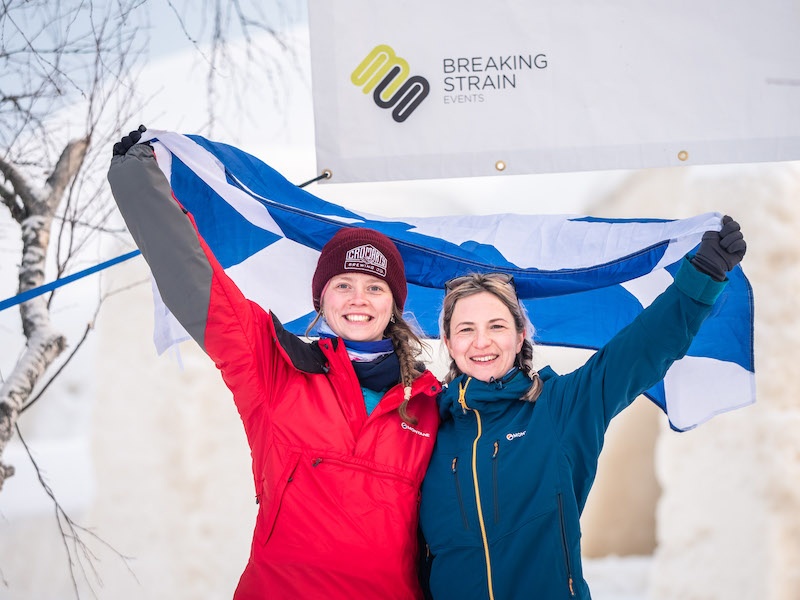 Two friends from the Highlands have completed a challenge of a lifetime.

Lesley Strang and Ashley Lockhart (pictured) have trekked 70km across the Arctic Circle – and they have raised £18,000 for children’s charity, When You Wish Upon A Star Scotland.

The Scottish registered charity grants wishes to children aged 4-17 who live with a life threatening illness.

Lesley, from Embo in Sutherland, and Ashley, from The Black Isle, took on the challenge to raise money specifically for the Highlands & Islands region, to ensure that children, who meet the charity’s criteria, and their families, can create some treasured memories.

“I had worked with the charity for a number of years in Edinburgh and had heard all about their various sporting/endurance type challenges.

“I had seen first-hand the difference the wishes can make to families going through hard times – The chance of being able to take funds back to families in Highlands & Islands was just incredible – so I said yes!”

It’s also a special year for the charity – who celebrate their 30th birthday.

Lesley and Ashley arrived in the Arctic Circle and took part in a trek which took three days and was organised through leading Scottish Event Management company Breaking Strain Events.

A group of nine trekkers stepped off the plane and into their snowshoes in Rovaniemi, Finland where they battled temperatures of -15, camped in tents under the stars, trekked over frozen rivers & lakes and pulled their own equipment using an expedition pulk sled whilst trekking for up to 12 hours a day.

The group crossed the “Finnish Line” together on 14th February, and Lesley and Ashley had completed an incredible challenge.

They’ve both been working hard on their fundraising targets and they’ve been overwhelmed by the support from their local communities.

To reach their targets, they arranged a few events.

These included Star Decorating Days at Potter’s House in Muir of Ord which raised £500, Yoga for Wishes which raised £310 and was hosted by Heather Gweneth Bird and their final pre-trek joint fundraising event The Burns’ Wish Supper at Resolis which raised over £6,100.

They also gathered some fundraising at last year’s Belladrum Festival.

Meanwhile lots of local businesses, and many friends have donated their support.

Lesley is also an expert at organising events.

She runs her own event production company called Lesley Strang Event Production, which is behind the hugely successful Belladrum Festival.

For When You Wish Upon A Star, she set up the Inverness Santa Fun Run & Walk at the UHI Campus.

This is the first time the charity has held this event in the area.

There has been a huge collective community effort to reach the fundraising amount of £18,000 which will help families in the Highlands and Islands.

The money will go towards granting wishes which could see families from the region going to visit Lapland in December in search of Father Christmas in Finland.

This adventure brings smiles to children’s faces and it’s a day that allows illnesses to be put on hold, swapping hospital beds for sleigh rides and time which brings families together to make precious magical memoires.

“I first heard about When you wish upon a star when I did some volunteer work for Lesley.

“Once I read about the challenge of the trek and where the charity money would go, I signed on the dotted line!

Judith King, from When You Wish Upon a Star Scotland, said:

“We are so proud of Lesley and Ashley from the moment they signed up, to their incredible fundraising over the last nine months (and still going!) to that of successfully completing the Arctic Wish Trek is an incredible achievement.

“Having taken part in the 2019 Arctic Wish Trek it’s certainly not a walk in the park, it challenges you on all levels, both physically and mentally, but why you’re taking part is at the forefront of each step you take in the snow and this drives you to cross your important Finnish Line to help grant magical Wishes.

“The astonishing amount of funds raised is simply amazing, we can’t thank everyone enough.

“Moments like our magical Winter Wishes to Lapland can only be created by the support of our amazing Wish granters and we are truly honoured to have Lesley, Ashley, the local communities, businesses, friends and family who have supported and helped to raise over £18,000 very much part of our Wish granting team throughout the Highlands and Islands.”

The Arctic Wish Trek fundraising pages will be open till 30th April, if you wish to make a donation please follow the links to see why they both have taken on the Arctic to help grant local Winter Wishes.