Losing a Dog in Lockdown 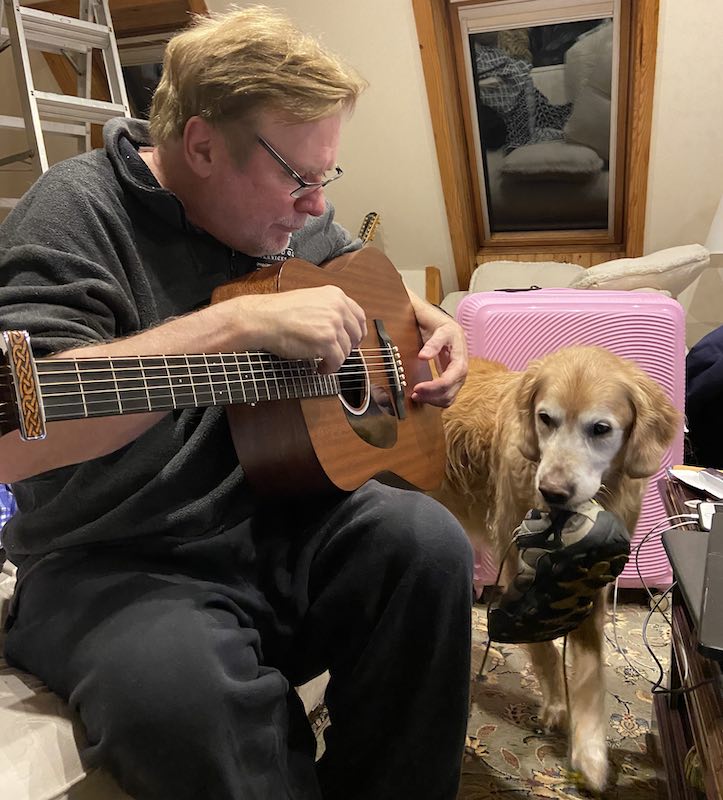 A first person account by dog expert Chris Muldoon from Dogs for Good.

This is what Chris Muldoon from Glasgow, Operations Manager at UK-wide charity Dogs for Good who has many years’ experience of training dogs had to say:

They say life is a great teacher and with that thought I think the lived experiences offered to us when they arise, as professionals and as people in our field, must be some of the greatest opportunities for us to develop skills, empathy, understanding and compassion.

This opportunity for me to learn even at this narrowing end of my career was brought home to me over the past ten weeks of lockdown here in the UK.

We have a client, living alone in England who injured herself one week before lockdown and due to this she could not look after her dog, an eight-year-old Golden Retriever with whom she had lived and worked from when he was eighteen months old.

As we prepared to go into lockdown I agreed to take him home with me to Scotland, I’d met him in kennels and liked him instantly, lots of personality and a playful zest for life.

He had been unwell too, and after rigorous tests for cardiac anomalies, he had experienced a number of significant seizures, and, after investigation he was diagnosed him with an aggressive terminal brain tumour.

To add to the drama, all of this unfolded one day before lockdown.

Despite his illness his attitude was always one of enjoying life and the sheer pleasure of being close to people.

This also meant the owner said goodbyes to her dog in a rushed and unceremonious way, knowing he was unlikely to survive the time away from her.

So, for the past ten weeks, the amazing Mr Miller has been my constant companion in lockdown with our one hour walk a day as reward for being cooped up together.

For our walk we made for the river where he revelled in a swim and rolled in the grass.

He was full of charm and character and had lots of endearments such as a huge snore and run up the stairs like a herd of elephants and working out the best place to lie was in the intersection of all the paths through the house, so the only way round him was over him.

For someone who has not had a dog for a long time it has been a delight to see him become part of the fabric of the house, including slobber, fart smells and hair loss.

Every few days he would have a huge seizure but within 20 minutes he would recover and be back to being Miller.

His most regular times for seizures was 2 and 4am which meant we watched a lot of late night shopping channels as I lay on the floor to keep him company as he recovered.

He was being medicated for these episodes and if there were two or three in a day his medication would be increased resulting in a return to a state of calm for him.

Every day was a revaluation of the quality of life left to him.

I text messaged the client who owns him every second or third day with updates on his health and life with me.

I had picked up quickly that if I rang directly, the mere sound of the phone ringing created such a sense of fear that there was a panic in her voice.

I surmised that she was waiting for the inevitable phone call, so we agreed texts meant business as usual.

It was Miller’s 9th birthday on Tuesday, May 26 and he started the day with a birthday cake along with a long walk and swim.

I had just texted his owner to tell her he was in full birthday mode and was enjoying his big day.

At 8pm he had a long, protracted seizure, leaving him confused and dazed.

This was followed by three more and a call to the vet.

The advice was to increase his anticonvulsants to beyond prescribed dosage, I did so nervously but it had the desired effect of stopping the ravages of the seizures and giving him a semi peaceful night.

By 5 m he was pacing and trying to find a place to find some respite from the trauma he was experiencing.

I had texted the owner in order not to alarm her saying that he was unwell, and I didn’t want to say more until I had taken him to the vet in the morning.

As the morning progressed it became clear he was not going to recover from this last bout of seizures and that the options were all but exhausted.

With a real sense of sadness but confidence that the decision was right I said goodbye to the amazing Mr Miller at 6pm on Wednesday, May 27.

One day after his 9th birthday, he went to sleep forever.

I made the inevitable phone call.

As you can imagine his owner was inconsolable on so many levels.

The death of her dog, the end of her partnership, not being with him and a sense of helplessness and isolation due to the lockdown.

I can only imagine.

We can only show empathy based on that imagination or draw on similar experiences that we try to align to the experience of the client to the best of our abilities.

I can’t imagine what it’s like to lose your independence and the companionship of a dog you lived alone with for seven years.

I can’t imagine what it’s like to not be able to have any influence over what happens to him when he is ill and the guilt that not being with him creates when he passes.

However, I can, where possible, share their lived experience.

I want to pay respect to the owner of this dog, her bravery, resilience, compassion and caring for the dog she loved even to the point of giving him up.

I also want to acknowledge the service of the amazing Mr Miller, a wonderful Dogs for Good assistance dog, and thank him for the final gift of allowing me to learn from his journey.

They say life is a great teacher.