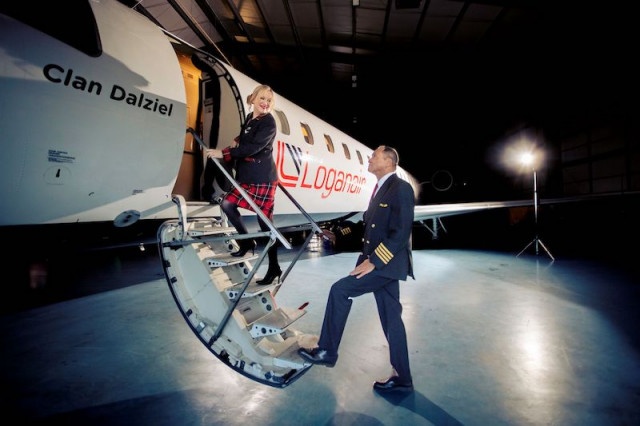 Loganair, the UK’s largest regional airline, has joined some of the biggest brands in this year’s festivities as it launches its first ever Christmas advert.

In true Loganair fashion of bringing loved ones together, the advert stars the airline’s very own married pilot and in-flight trainer who first met at work 14 years ago.

Captain Lionel McClean and wife Linda (main picture), a senior ground and in-flight trainer, star in the new festive advert as they help bring lost bears Logie and Lottie back together for Christmas.

The married couple, who have been together for 11 years and married for eight, feature as they fly lost bear Logie home and back into Lottie’s arms, after Linda finds him in her suitcase one cold winter’s evening.

Logie and Lottie were introduced as a special keepsake for children flying with the airline back in 2018, after Loganair reunited an eight-year-old girl from Orkney with her lost cuddly toy ‘Teddy’, flying him over 200 miles back to Kirkwall for a tearful homecoming.

To celebrate the story of Logie and Lottie’s reunion, Loganair is giving a family the chance to reconnect with their loved ones this Christmas.

To enter the competition, families across the UK should head to Loganair’s Twitter, Facebook or Instagram (@FlyLoganair), to tell the airline their own hopes for reuniting this Christmas.

“We are incredibly excited to be launching our very own Christmas advert and want to give a family the chance to have their own story as they reunite during the festive season.

“We are wholly committed to keeping people connected and we wanted to encapsulate that special journey of bringing loved ones back together following a Christmas where they were apart.

“It was important to us that our own people were involved in the campaign as we mark a festive period together once again and who better than Lionel and Linda who were themselves brought together via the airline.”

“Lionel and I were delighted to be asked to be part of the Christmas advert and it was a lot of fun filming together.

“Loganair is at the heart of so many stories of people coming together and through the airline, Lionel and I not only have our own tale to tell, we have been honoured to be part of that journey for so many others.”