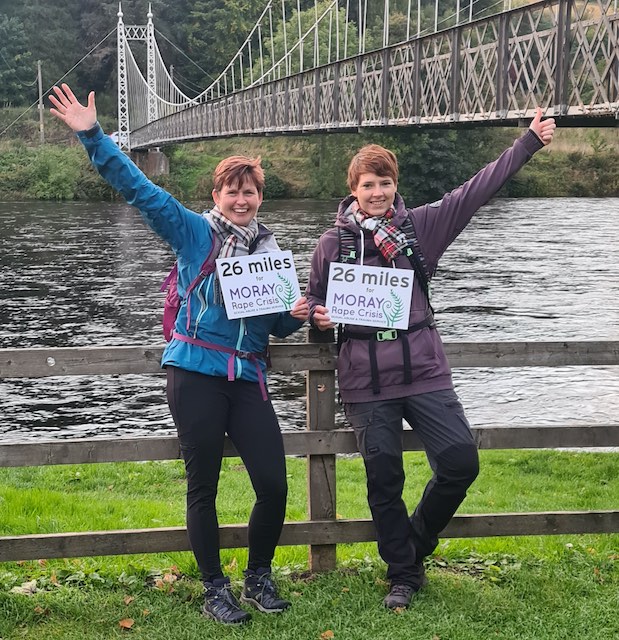 Two Moray women whose hopes of completing a 26-mile walk for charity were dashed due to Covid have still managed to raise thousands of pounds.

Friends Clare Lock and Amy Mortimer had planned to do the Aberdeen Kiltwalk in June, but the event was cancelled because of the Coronavirus pandemic.

However, the plucky women decided they still wanted to put their best foot forward and chose to walk the 26-miles on their own.

Originally, taking part in the Kiltwalk had been planned by Moray Business Women’s Club to raise funds for their charity of the year, Moray Rape Crisis.

Many members had signed up to take part and they collectively raised over £1,000 with the Hunter Foundation matching that figure.

However, as Clare, president of the networking group explained, as the pandemic progressed, the group’s plans had to change too.

“This year Moray Business Women’s Club chose Moray Rape Crisis as its charity and there were a number of us who had signed up to do the Kiltwalk.

“When that was cancelled, we all agreed to do it together, but the two-household rule came into force so those plans were scuppered as well.

“However, Amy and I decided we still wanted to carry on.”

The women chose to walk the Speyside Way, starting at Aberlour, walking 13 miles before turning around to walk back.

“Amy and I were determined to walk the 26 miles to thank everyone that had sponsored us for the Kiltwalk.

“It was a really tough challenge for both of us, but armed with rucksacks that were a cross between a chemist and a sweet shop, we managed the 26 miles with no injuries, in nine hours.

“The dry, sunny weather helped, and having great company to chat with the whole 26 miles!

“We were delighted to make it to the end and celebrated with fish and chips.”

Sponsorship from the walk raised £2507 for Moray Rape Crisis and Moray Business Women’s Club aims to raise £5000 by the end of this year with that target nearly being met.

Later this month the Club will host its annual awards ceremony online, STV reporter Nicola McAlley will be hosting the event with Dr Karen Darke MBE as guest speaker.

Tickets for the event on November 20th are a donation of £5 or £10 with all the money from ticket sales going directly to MBW’s charity of the year, Moray Rape Crisis.