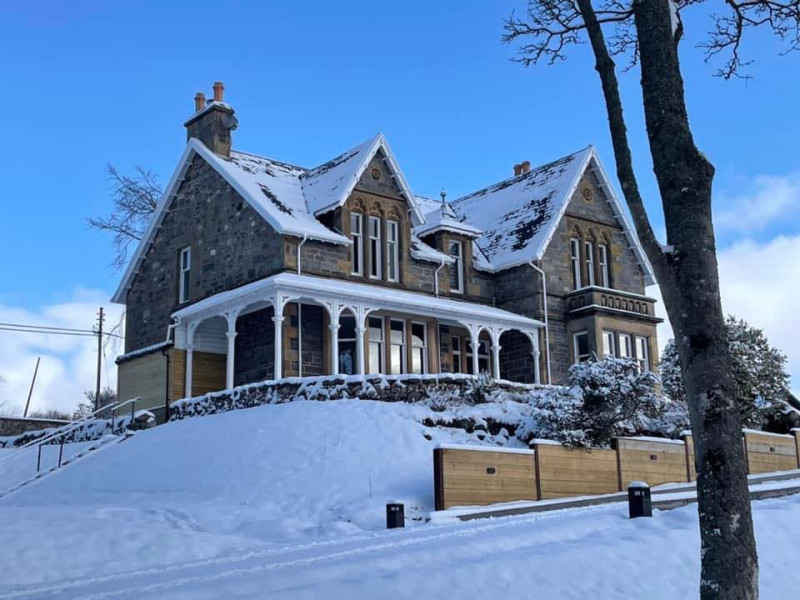 Esther Botha, proprietor of recently opened luxury boutique B&B The Viewmount in Kingussie in the Cairngorm National Park, is looking forward to hosting her first whisky tasty event in partnership with The Highland Whisky Shop in Inverness having just finished her first Easter with paying guests.

Esther has teamed up with fellow lockdown entrepreneur, Ferit Gur, who founded The Highland Whisky Shop in Inverness in 2021 having relocated to Scotland from Turkey.

In December 2020, Esther took over a former youth hostel in Kingussie dating back to the 1870s.

Despite the challenges of a global pandemic and two lockdowns, Esther has lovingly restored and renovated the Victorian Villa.

Originally called Viewmount, then the Auld Alliance, Esther has drawn on the history of the building and called it The Viewmount once again.

A significant investment has transformed the former youth hostel into a luxury boutique B&B – a BB&B.

The Viewmount has been finished to an extremely high standard and every effort has been made to guarantee a comfortable and luxurious stay, including super king-sized beds, deep bathtubs, as well as showers in the ensuite bathrooms, smart TVs in every room and complimentary high-speed Wi-Fi.

It has four double ensuite bedrooms, one of them with accessible access on the ground floor.

Esther opened the doors at the end of December and has already built a strong reputation for quality and service.

She was also runner up in the 2022 Luxury BnB Awards in the most effective marketing and use of social media category, announced in April.

Using insights from her own extensive travel over the years and building on the experience of hosting her first guests over the last couple of months, Esther believes she has the perfect recipe for success and is gearing up for a busy season.

“I think the last two years have been stressful for everybody.

“First of all, people are just desperate to escape the everyday and that doesn’t just mean their surroundings, it means everything else that comes with it.

“When people come to The Viewmount, I see them start to relax the moment they cross the threshold – it is a home away from home.

“I offer a concierge service and I can accommodate pretty much any request.

“At The Viewmount, guests can have their breakfast as late as 11.30am and I am hosting my very first whisky tasting in May.

“People have got Zoom fatigue; they want to be back enjoying good company in person.

“Virtual whisky tastings were great in lockdown but nothing beats being in a room with an expert and likeminded people.

“I really hope many longstanding friendships will form from a stay at The Viewmount.”

Esther’s journey to this point has been remarkable and she believes that fate brought her to Kingussie.

A South African, she has lived in the UK for over 20 years, retraining as a solicitor and living mainly in London.

Keen to explore more of Europe, she set herself a challenge to work through the alphabet and visit a new place and read a book starting with each letter.

This challenge saw her read ‘Home Work: A Memoir Of My Hollywood Years’ by Julie Andrews whilst visiting Avignon and ‘How to be an F1 driver’ by Jenson Button in Brussels.

In a twist of fate, ‘F’ took her to Fort William instead of Flam in Norway.

Esther picks up the story:

“By this stage, I had already decided to view properties with a view to opening a luxury B&B.

“The estate agent advised me that The Viewmount, then known as The Auld Alliance, was up for sale so I skipped all the way to ‘K’ for Kingussie and the rest, as they say, is history!

“This time last year, I was living on a building site and now I’m welcoming guests to The Viewmount – my little piece of Highland heaven.”

The Viewmount is both energy efficient and has a minimal carbon footprint.

From maximum insulation, double glazing and an electric vehicle charging point – free to use even by non-residents.

The Viewmount can only be booked directly at www.theviewmount.com.

The whisky event takes place 25th May and can also be booked on the website.

Tourism Looking to Opportunities in 2023