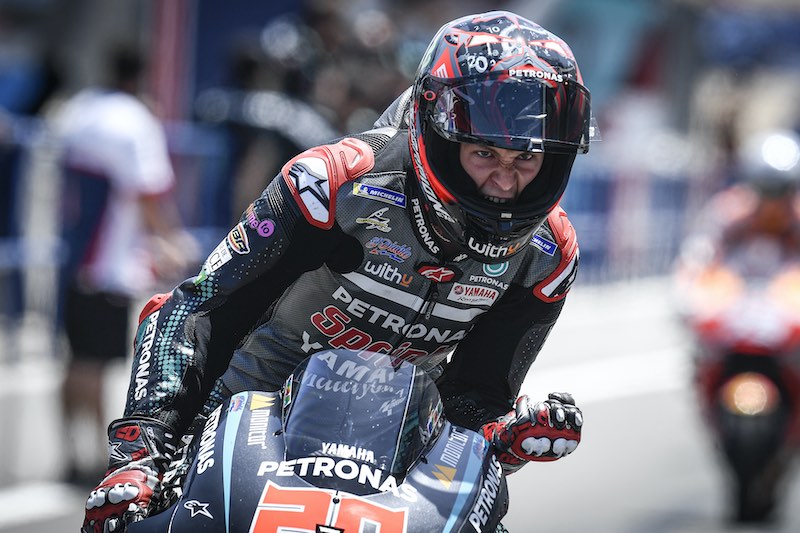 The Frenchman (pictured) takes a sublime victory ahead of Viñales and Dovizioso, with the reigning Champion crashing out and breaking his humerus.

In a day of drama, thrills and spills, Fabio Quartararo (Petronas Yamaha SRT) claimed his first MotoGP™ victory – and France’s first since 1999 – in a truly stunning and dramatic Gran Premio Red Bull de España, putting an Independent Team Yamaha on the top step for the first time in MotoGP™ and taking the Petronas Yamaha SRT team’s first win.

The Frenchman capitalised on a Lap 5 mistake from race leader Marc Marquez (Repsol Honda Team) as he suffered a run off, and Quartararo didn’t look back – pulling the pin to stamp some authority on Round 1 for the premier class.

We witnessed a stunning comeback from the number 93 after his mistake, with the reigning World Champion unleashing unbelievable pace mid-race – but he then suffered a huge crash at Turn 4 with four laps remaining, breaking his right humerus and soon heading for surgery.

Maverick Viñales (Monster Energy Yamaha MotoGP) put in an impressive performance to bank 20 points and take second in the wake of the drama, with Andrea Dovizioso (Ducati Team) completing the podium after a late lunge on Jack Miller (Pramac Racing).

Viñales got a storming launch from the middle of the front row and grabbed the holeshot into Turn 1, with Miller getting his Ducati off the line like a rocket to initially go P2.

The Australian was wide though which let Marquez come through into second after a fairly average getaway, with polesitter Quartararo slotting into P3 at Turn 2 as he then got the better of Miller.

However, the Desmosedici grunt saw Miller get up the inside of Quartararo down into the Dani Pedrosa corner, as Viñales got out the seat around Turn 8 in an early scare for the number 12.

Francesco Bagnaia (Pramac Racing) was then past Quartararo on Lap 2 as the Frenchman initially fell back, but he was back through at the final corner on that lap as Marquez and Viñales went toe-to-toe at Turn 4, before Marquez managed to make the move stick at Dani Pedrosa corner.

Was this the break?

Lap 5 would prove a game-changer and say no.

Going through Turn 4, we witnessed something we’ve seen so many times before – a miraculous save from the reigning Champion.

Somehow, the number 93 picked his HRC machine up from an almost certain crash and managed to keep it upright through the gravel, coming back on the track in 16th.

A huge moment, but it was far from race over for Marc Marquez.

Far, far from it…

At the front, Viñales was leading for a couple of laps, but Quartararo had got the better of Miller and was soon right on the tailpipes of the number 12 Yamaha.

A mistake at Pedrosa corner was then followed by another one heading into Lorenzo corner on Lap 9 after the pace had slowed into the 1:39s, and as Viñales went wide, Quartararo and Miller were through.

Slightly further back, however, attentions we starting to turn to Marc Marquez.

In just five laps, Marquez had managed to get himself from P16 to P10 and was lapping around a second quicker than most of the leading group.

Lap 12 saw Marquez set a 1:38.3 – the fastest lap of the race – that was a good 0.4 faster than Quartararo, and even more than the riders in the podium hunt.

Lap 13 soon passed and doing the passing was Marquez.

He’d got the better of Miguel Oliveira (Red Bull KTM Tech3) and a struggling Valentino Rossi (Monster Energy Yamaha MotoGP) to move up into P8, and a podium finish seemed well within his grasp.

At the Lap 15 stage, Quartararo’s lead snuck past the two-second mark for the first time, but the shark music was playing as the cameras started to show an orange missile quickly making its way towards the back of the fight for the podium places.

With 10 to go, Marquez was a second quicker than third place Viñales, and the reigning Champion getting back into a podium position now seemed a formality rather than a possibility.

With eight laps to go, Marquez was just two seconds away from the podium as he hunted and passed Franco Morbidelli (Petronas Yamaha SRT), Bagnaia, Dovizioso… suddenly, Marquez had Miller and Viñales right in front of him.

Quartararo was over five seconds clear, but all eyes were on Marquez vs Miller.

Six laps to go, Turn 13 was Marquez’ chosen passing place on Miller but the Australian bit straight back at Turn 1.

A man on a mission, Marquez was straight back up the inside at Turn 2 and made the move stick.

Now, Viñales was next on the list – and he would prove the rider right behind Marquez when the eight-time Champion ran off track at Turn 4.

Coming across the line with four laps remaining, Marquez was plotting his move into P2.

However, there was about to be another twist – and a vast one at that. Coming out of Turn 3, Marquez was launched off his RC213V in a vicious way.

Tumbling heavily through the gravel, the reigning Champion was taken to the medical centre – and has a broken right humerus.

Back at the front, Quartararo crossed the line to take an incredible maiden MotoGP™ victory, making some history and converting some searing premier class pace into a winner’s trophy.

Viñales was able to grind out a P2 despite struggling with his front tyre from “lap seven or eight”, and the battle for the final podium spot went down to the final lap.

With two to go, Dovizioso made his move on Miller at Turn 6 to hold P3, with Morbidelli then almost crashing after colliding with Miller on the inside of the corner.

This allowed Pol Espargaro (Red Bull KTM Factory Racing) through in P5 – the Spaniard in the fight all race – but Morbidelli would eventually get the better of Espargaro at the last corner, on the last lap.

Viñales took P2 from Dovizioso, with Miller leading Morbidelli and Espargaro over the line. P2-P6 were covered by just 2.3 seconds.

Bagnaia couldn’t keep up the pace in the latter stages as the Italian slipped out of contention and finished P7, with Oliveira placing P8 – his equal best result in the premier class.

There were only 15 finishers in a brutal MotoGP™ race in Jerez.

Rossi suffered an issue and was out of the race with seven to go, with Iker Lecuona (Red Bull KTM Tech3), Aleix Espargaro (Aprilia Racing Team Gresini) and Joan Mir (Team Suzuki Ecstar) also not finishing.

There aren’t enough superlatives to describe what we just witnessed in the MotoGP™ class as 2020 kicks off in style, but with some serious drama on the side.

Tune in again next weekend for the Gran Premio Red Bull de Andalucia!

“The best moment of my life for sure.

“I haven’t realised it yet.

“It feels so strange without the fans, I would love them to be here to cheer with them.

“But honestly, this race was for them, for all the people affected by coronavirus and for my family, my brother always supporting me, my parents…

“It was a really tough race because first of all, I didn’t do a very good start.

“I was fifth behind Pecco and Jack and I knew that behind the Ducatis, it’s so difficult to do our corner speed, especially on the last sector.

“I overtook Pecco in the last corner, also Jack.

“Then I saw Marc’s mistakes and then it was difficult to catch Maverick.

“He did a small mistake in Turn 6 and then I did my own mistake but honestly it felt so strange because yesterday in FP4, the grip was really good.

“After the Moto2 race we know the grip is normally low, but I didn’t expect that much.

“If you check the pace from yesterday and today, it was almost one second slower.

“So, it was difficult to understand the track, but the most important thing is that we had our first victory today.”