Ross Pays Tribute to Her Majesty in House of Commons 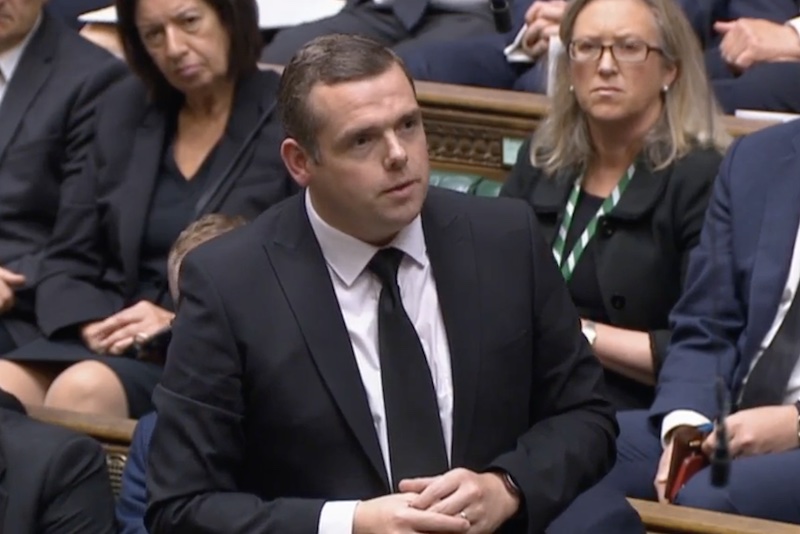 Moray MP Douglas Ross has paid tribute to Her Majesty, the late Queen Elizabeth II, in the House of Commons.

Douglas participated in the tributes alongside fellow MPs after the death of Her Majesty was announced on Thursday evening.

His speech highlighted what turned out to be The Queen’s final visit to his Moray constituency alongside the Duke of Edinburgh, in November 2014.

Their visit to RAF Lossiemouth and Kinloss Barracks coincided with their 67th wedding anniversary, which Douglas says showed The Queen’s dedication and commitment to delivering for the country at every opportunity.

Douglas also recalled meeting Her Majesty at the opening of the Scottish Parliament last year, telling fellow MPs about her beaming smile as she shook his hand.

He added that this smile was there for all to see on what was ultimately her last public photo, taken at Balmoral on Tuesday.

He said that his thoughts and of those in Moray in the coming days and weeks will be with the Royal Family as they come to terms with the loss of the monarch who reigned for 70 years.

“I was honoured and humbled to have the opportunity to pay tribute to Her Majesty The Queen in the House of Commons on behalf of people across Moray.

“With hundreds of MPs hoping to take part, we had just a few minutes but I wanted to put on record the affection and love people in Moray had for the Queen as shown during her visits to the area over the years.

“The passing of Her Majesty is a moment of great sadness for people in Moray and across the United Kingdom.

“She represented everything that is great about our country and was unwavering in her commitment to public service.

“I know local people in Moray have many fond memories of meeting the late Her Majesty and other members of the Royal Family when they visited the area.

“A visit in 2014 with the Duke of Edinburgh, during their wedding anniversary summed up their dedication to public service as the Queen showed her support for our armed forces at RAF Lossiemouth and Kinloss Barracks.

“Her late Majesty The Queen was an extraordinary leader and my thoughts are with the Royal Family at this time after the loss of a such a loving mother, grandmother and great-grandmother.

“The tributes today showed Parliament at its very best and I was proud to have the opportunity to play a small part.

“On behalf of everyone in Moray I send our thoughts and every best wishes to King Charles III.

“God Save The King.”