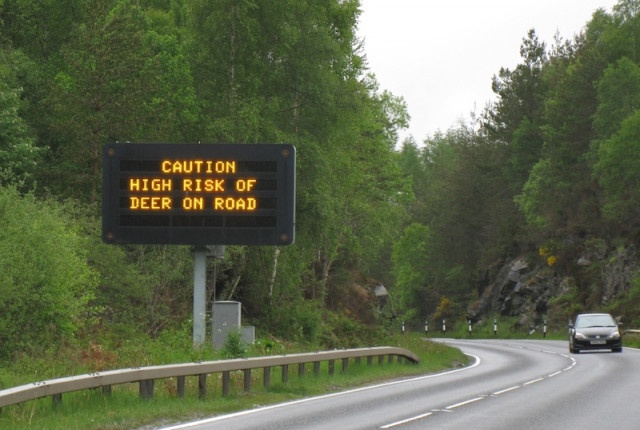 As the clocks change this weekend, NatureScot is warning motorists to be aware of the increased risk of collisions between deer and vehicles due to the shorter days at this time of year.

With night falling earlier, deer are more likely to venture on to grass verges near roadsides as they browse and feed.

In response to the potential risk, and to safeguard public safety, NatureScot – in conjunction with Transport Scotland and Traffic Scotland – are placing warning messages on electronic variable messaging signs (VMS).

From Monday, 1 November to Monday, 22 November, the signs will warn motorists at key locations on the main trunk roads.

It’s estimated that collisions between deer and vehicles could be as high as 12,000 per year in Scotland, resulting in 50 to 100 human injuries.

The majority of collisions take place in early evening through to midnight, with another peak occurring from 6am to 9am.

Over the past 50 years, the number of wild deer in Scotland has increased, as has their range.

In the same period, the volume of road traffic has almost doubled.

This combination has led to increased deer-vehicle collision rates across the country.

“From October to December, deer are more likely to be on the road as they move down to lower ground to find food and shelter.

“The highest risk is from sunset to midnight and shortly before and after sunrise.

“Particularly in these peak times, we advise motorists to slow down and watch for deer crossing roads.

“Be aware that if you’re driving near woods, deer can suddenly appear before you have time to brake.

“If you do hit a deer, report it to the police, even if you’re uninjured and your car isn’t damaged, as the deer may be fatally injured and suffering.”

Try not to suddenly swerve to avoid hitting a deer.

A collision into oncoming traffic could be even worse.

Only brake sharply and stop if there is no danger of being hit by following or oncoming traffic.

Try to come to a stop as far away from the animals as possible to allow them to leave the roadside without panic – and use your hazard warning lights.

Be aware that more deer may cross after the one or two you first see, as deer often travel in groups.

After dark, use full-beams when there is no oncoming traffic, as this will illuminate the eyes of deer on or near a roadway and give you more time to react.

But dim your headlights when you see a deer or other animal on the road so you don’t startle it.

Report any deer-vehicle collisions to the police, who will contact the person in the area who can best help with an injured deer at the roadside.

Do not approach an injured deer yourself as it may be dangerous.

“As we face the challenges of the acknowledged climate change and biodiversity crises, we must explore opportunities to reduce, manage and mitigate our impact on the natural environment.

“Wild deer are an integral part of the Scottish landscape and whilst appropriate management of population numbers is needed, nobody wants to see or experience incidents involving deer on the country’s roads.

“This biannual campaign to utilise targeted parts of the VMS network has been developed to provide useful information to motorists in areas and at times where analysis of the data collected suggests there may be more chance of deer venturing across the road, helping to protect deer and keep the public safe.”

“As Scotland’s deer numbers rise and expand their range, it’s really important that those driving on roads at night are extra vigilant.

“We are aware that deer accidents are more likely to happen on rural roads adjacent to forests and other wild habitats but they are becoming more common on major roads around towns and cities.

“Hitting a large animal is distressing at best and apart from damage to vehicles and potential injury to drivers and passengers, no-one wants to leave a wild animal hurt and in enduring pain.”