Are You a West Coaster?  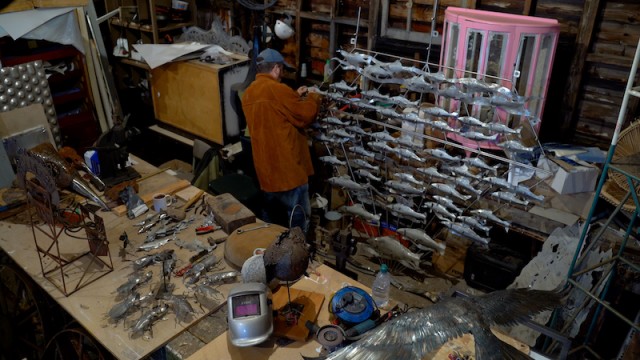 Meet the Cultural West Coasters in the latest film released by Visit Wester Ross, a voluntary tourism association based in Wester Ross in the Scottish Highlands, as part of its campaign designed to attract visitors who have an affinity with Wester Ross and the people who live there.

The film features sculptor Greg Dobson and painter Aileen Grant from The Bridge Art Collective, a group of artists from Skye, Lochalsh and Lochcarron who have come together with a shared passion for making art which is thoughtful and deeply felt and rooted in Wester Ross.

The Bridge Art Collective forms links between artists just setting out on their careers and more established artists, as well as forming a bridge between artists and the wider community.

The artists, all West Coasters, would like the art they make to contribute to the well-being of their fellow citizens and celebrate the beautiful area of Wester Ross.

Speaking about her involvement in the campaign with Visit Wester Ross, Aileen Grant said:

“I am delighted to be part of this campaign.

“I think there is a uniqueness about art made here, inspired by the stunning Wester Ross landscapes and light which I do my best to capture and share with others.”

“People aren’t just coming to Wester Ross for the scenery, they are coming for the rich traditions of the music, the drama, the film, the people and the artwork as well.

“I think most people that visit come with a respectful knowledge that people have to continue living here once they’ve left and that’s exactly the visitors we want to welcome to the area.”

Launched earlier this month, Are you a West Coaster? comprises a series of films featuring West Coasters who run businesses in Wester Ross and are looking to develop sustainable tourism in the area, which is also designated a Biosphere by UNESCO.

This campaign is the latest development in the tourism strategy for Wester Ross, supported by national efforts spearheaded by VisitScotland to develop sustainable tourism.

Over the next three weeks, the remaining films will be released featuring West Coasters in their places of work, talking about what it’s like to live in Wester Ross and the impression the area makes on visitors.

Viewers are still to be introduced to the Water West Coaster and the Foodie West Coaster, each giving their perspective and asking the question: Are you a West Coaster?

“This area of the Scottish Highlands has a great deal to offer visitors – there’s a lot more to it than a quick drive through, or a one-night stopover.

“The culture, the land, and the people, have developed together over many generations into becoming something that the visitor can only begin to appreciate through taking time to explore, discover, and enjoy more about the area.

“So, we are asking people to identify as a West Coaster and come take some quality West Coast time to really understand what we have here.”

The full series will be released every Friday by Visit Wester Ross on its social media platforms.

More information about Visit Wester Ross can be found by clicking here.