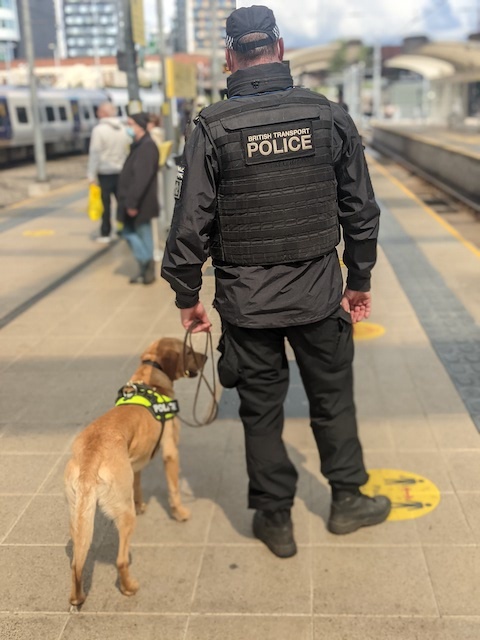 Uniformed and plain-clothed officers from its dedicated County Lines Taskforce, alongside specialist drugs dogs, deployed on 94 operations – 46 of which were joint with other police forces.

The operations took place across train routes and stations and spanned the entirety of the UK – from as far south as Plymouth, and as far north as Aberdeen.

Over the seven-day period, the Taskforce visited 20 cuckooed addresses, identified nine vulnerable people, including eight under 18s, and made 37 arrests.

A key aim of the team is to identify and safeguard vulnerable children and adults often exploited by these organised criminals to transport drugs and cash between import and export locations, which can be hundreds of miles apart.

“The exemplary results from this week of enhanced efforts are just a snippet of the work our dedicated Taskforce carries out year-round to disrupt County Lines activity.

“Our operational deployments are unpredictable and intelligence-led – we will tackle this type of activity alongside our policing partners wherever it occurs.

“Working closely with other forces on these operations is critical to crackdown on this crime type and make the railway a hostile environment for organised criminals to move drugs and illicit cash across the country.

“Most importantly, nine vulnerable children and adults encountered by our officers over this seven-day period were identified on the network.

“Alongside The Children’s Society, we’re encouraging everyone to look closer for the signs of child criminal exploitation on the railway, and report any concerns to us.

“These children are victims – exploited by organised criminals to move commodities between locations across the UK.

“While lockdown meant children being exploited were often hidden from the view of professionals and the public, the easing of restrictions means there are now more opportunities for us all to spot the warning signs.

“It’s vital people look beyond the obvious because exploited children may not always appear upset or vulnerable or behave in the way we would expect victims to.

“We know trauma may cause them to appear angry or aggressive and they are often manipulated into thinking they are making a choice.

“Through our Look Closer campaign, we are urging anyone who encounters children in their daily lives – from morning commuters and delivery drivers to hotel and shop staff – to report any concerns that a child might be being exploited to the police.

“Contacting the police with concerns about a child could be a crucial first step in helping a child escape a situation of horrific abuse and unimaginable trauma.”