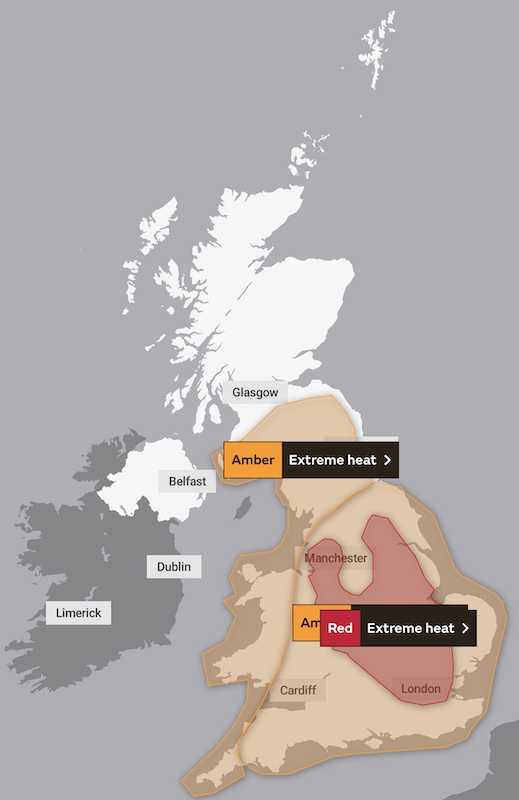 For the first time temperatures of 40C have been forecast in the UK and the Met Office has issued the first ever Red warning for exceptional heat.

Exceptional heat is expected to affect a large part of England early next week, with temperatures likely in the high 30s C in some places and perhaps even reaching 40C.

An Amber Extreme heat warning, has been in place for much of England and Wales for Sunday, Monday and Tuesday (17th – 19thJuly) since earlier this week.

Today the amber areas are also being extended to cover Cornwall, west Wales and parts of southern Scotland.

“Exceptional, perhaps record-breaking temperatures are likely early next week, quite widely across the red warning area on Monday, and focussed a little more east and north on Tuesday.

“Currently there is a 50% chance we could see temperatures top 40C and 80% we will see a new maximum temperature reached.

“Nights are also likely to be exceptionally warm, especially in urban areas.

“This is likely to lead to widespread impacts on people and infrastructure.

“Therefore, it is important people plan for the heat and consider changing their routines.

“This level of heat can have adverse health effects.”

The step up in warning level to red is running parrel to an increase in the current Heat Health Warning to Level 4 for England by the UK Health Security Agency.

The high pressure near the southern half of the UK, which has been responsible for this week’s warm weather, continues to dominate bringing largely dry and clear weather for most.

However, during the weekend, a developing southerly flow will allow very high temperatures currently building over the continent to start to spread northwards into the UK.

Further north, eastern areas of Scotland could see temperatures in in the high 20C in a few places, well above their average for the time of year.

Will we get record-breaking heat?

This is the first time we have forecast 40C  in the UK.

The current record high temperature in the UK is 38.7C, which was reached at Cambridge Botanic Garden on 25 July in 2019.

Weather forecast models are run numerous times to help us quantify the likelihood of a particular event occurring and estimate the uncertainty which is always present in weather forecasting to some degree.

Some models are now producing a 50% chance of maximum temperatures in excess of 40C in isolated parts of the UK for the start of next week.

Mid to high, 30s Celsius will be seen more widely with an 80% chance we will exceed the current record.