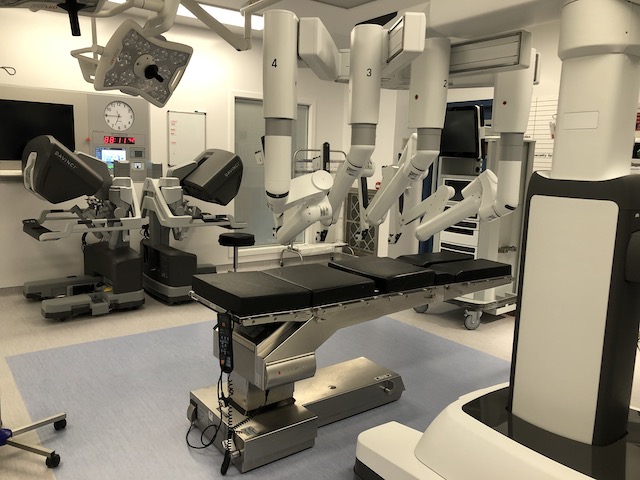 The first robotic-assisted operations have taken place at Raigmore Hospital in Inverness, and the teams involved are delighted with how well the new technology has worked.

The robot allows complex surgical procedures to be performed using a minimally invasive approach, bringing NHS Highland to the forefront of surgical delivery.

This technology will also help in reducing the length of time a patient needs to stay in hospital after surgery.

Colin Richards, Colorectal Consultant at Raigmore Hospital, led the team who carried out the first of these operations.

“This is the most advanced surgical technology in the world and from what I’ve seen so far I am confident that it will bring huge benefits to our patients.

“The DaVinci system allows us to do conventionally challenging operations using a minimally invasive technique.

“The 3D magnified view, along with the ‘wristed’ instruments and the ability to dissect and suture in confined spaces all contribute to making this possible.

“Already we have seen several patients who have undergone robotic surgery recover in a normal ward instead of the high dependency unit.

“This is a major advantage for the patient as with a shortened recovery period it means they will be discharged earlier allowing them to recuperate at home.

“I’d like to thank the whole team in Raigmore who have helped bring the benefit of robotic surgery to our patients.”

One of the first patients to be operated on using robotic surgery was Linda Renwick (58) from Invergordon.

Linda, who lives with her husband and has two adult sons, had a robotic bowel resection as part of her treatment for bowel cancer.

Linda’s cancer was in the left side of the colon, in a position near the spleen that makes conventional laparoscopic surgery difficult.

She had a robotic left hemicolectomy and was out of her bed the next day, reading her book and taking just paracetamol for pain.

“When I heard I’d be operated on using the robot I was quite excited.

“It was cool to hear that you’d be one of the first to have surgery with a robot to help.

“I remember reading about it when the robot arrived at the hospital but not for a minute did I think I’d be involved.

“I had no idea what to expect.

“I’ve never had surgery like this before so had nothing to base it on but the reaction from everyone around me tells me what I need to know.

“They were gobsmacked that I was looking as well as I was after surgery and that I was out of bed.

“I was delighted to be discharged home after three days.

“It really doesn’t feel like I had surgery just over a week ago.

“I’m delighted with how it has gone.”