The Stamping Ground – A New Musical Featuring The Songs of RUNRIG  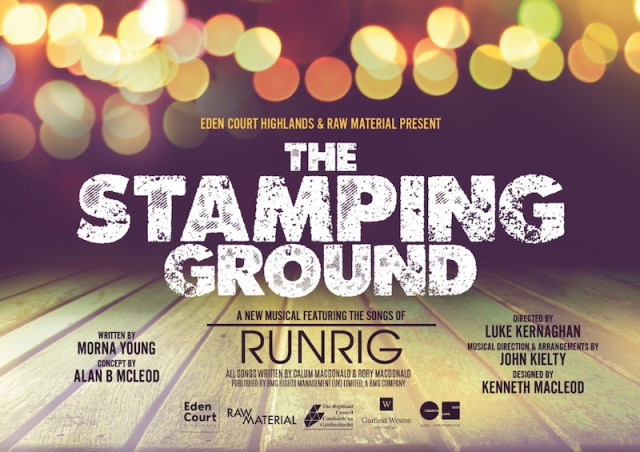 The Stamping Ground is an exciting partnership between Eden Court and Raw Material, the ambitious large-scale production will open at Eden Court in the Highland Capital, Inverness, on 16th July and runs to 30th July.

The ensemble cast will feature some of Scotland’s most exciting stage talent, including Steven Miller (Sunshine on Leith, The James Plays), Christina Gordon (Pride & Prejudice Sort of- Winner of Best Comedy/Entertainment play at the 2022 Olivier Awards), Annie Grace (The Strange Undoing of Prudencia Hart), Neshla Caplan (Adam, Sunshine on Leith), Brian James O’Sullivan (The James Plays, McGonagall’s Chronicles), and Barrie Hunter (The Cheviot, The Stag, and the Black, Black Oil).

The cast will also be joined on stage by a full, live band, to help bring the soaring power of the songs to life.

The Stamping Ground follows the story of Ewan and Annie, who return to their rural Scottish community after years away, but now find themselves lost in a place filled with more tourists than residents.

The heart of their community, the local pub, is for sale and tensions are rising about the future of this place they call home.

It’s the hottest summer in years and as the temperature rises, tensions flare within their family.

Their teenage daughter is growing up too fast and an old flame comes back into Euan’s mother’s life.

As relationships ignite and smoulder, the heartbeat of the land keeps beating as the villagers try to band together against the odds.

The production will feature exciting new arrangements of some of Runrig’s most iconic hit songs, including The Greatest Flame, All Things Must Change, and The Stamping Ground, the musical’s title track from the band’s celebrated 2001 album of the same name.

All of the songs in the show are written by Runrig’s founding members Callum and Rory MacDonald, who formed the band on Skye in 1973.

The Stamping Ground is written by award-winning playwright Morna Young (concept by Alan B. McLeod) and features the much-loved songs of Runrig, with musical direction & arrangements by John Kielty, directed by Luke Kernaghan and with design from Kenneth MacLeod.