Avoid Deer in The Headlights as The Nights Draw In 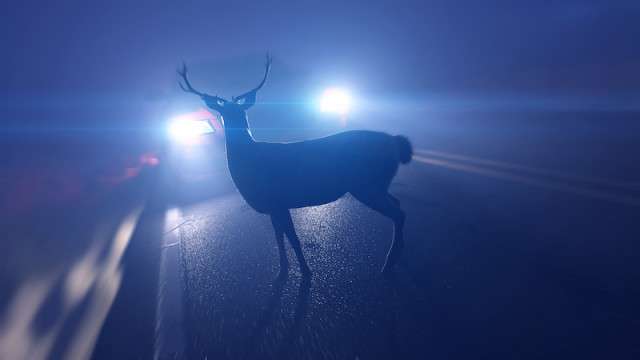 At this time of year and as more people will be driving in the dark, Forestry and Land Scotland is urging drivers to be extra alert to wild deer on the roads.

Wild deer numbers in Scotland have reached record levels at 1 million – double the amount recorded in 1990 – and the consequent danger of deer-related road traffic accidents is predicted to rise.

Forestry and Land Scotland previously released the figure of almost 2,000 reported deer-related accidents a year, though figures are believed to be nearer 8,000-14,000.

Collisions with large animals such as deer can be catastrophic, but there are some simple guidelines that can increase chances of avoiding a shocking accident.

FLS has joined with RoSPA to offer guidance for night time driving when there could be deer on the road.

“When driving on country roads you have to try to anticipate the unexpected.

“Single track lanes, blind corners, and even the possibility of animals crossing can make driving challenging even for the most experienced drivers.

“To minimise your chances of a collision with a large animal, such as a deer, follow some straightforward steps.”

Watch your speed on rural roads

Be aware of warning road signs

Be vigilant in areas where you have seen deer during daylight

If you see a deer, slow down to pass it and keep an eye out for more

Be ready to brake if a deer appears on the road

“As Scotland’s deer numbers rise and expand their range, it’s really important that those driving on rural roads at night are extra vigilant.

“We are aware that deer accidents are more likely to happen on rural roads adjacent to forests and other wild habitats but they are becoming more common on major roads around towns and cities.

“As we enter the Christmas season, we’ve pulled together advice for motorists.

“Hitting a large animal is distressing at best and apart from damage to vehicles and potential injury to drivers and passengers, no-one wants to leave a wild animal hurt and in enduring pain.”

To help protect Scotland’s national forests and land from the negative impacts of deer, Forestry and Land Scotland employs a number of techniques, including deer culling and fencing, where appropriate, to keep numbers down to a sustainable level.