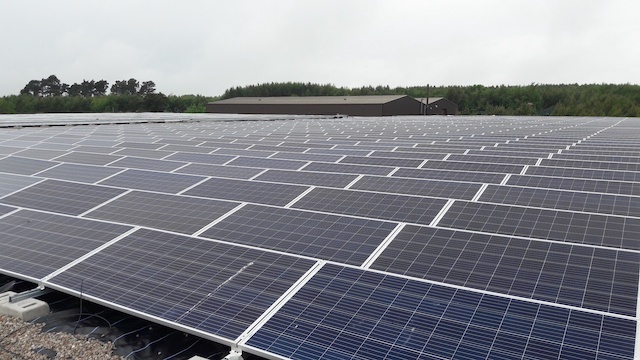 A £450,000 project to install over 1300 solar panels has been completed at Scottish Water’s water treatment works that serves customers in Inverness, Nairn and surrounding areas.

The scheme is the third largest delivered to date by Scottish Water Horizons, the publicly-owned water company’s commercial subsidiary that works to encourage growth and invest in renewable technologies.

The solar panels are expected to provide a third of the energy needed at the site at Loch Ashie, 5 miles south-west of the Highland Capital.

It is the first Scottish Water renewable generation project to include provision of charging points for electric vehicles.

As part of its Net Zero Emissions Routemap, launched this week, this will become a feature of future projects as Scottish Water aims to operate a fully emissions-free fleet of vehicles by 2040.

“Harnessing solar energy is just one of the many ways we are helping to tackle climate change and contributing to Scottish Water’s ambitious target to reach net zero carbon emissions by 2040.

“The site at Inverness provides a perfect opportunity to install a scheme of this scale, which will have a significant positive impact both on the environmental and financial cost of providing clear, fresh and great-tasting drinking water to around 86,000 customers in the Highland Capital and beyond.

“In the years ahead, we will be seeking to develop further, larger renewable energy projects so that self-generated green power can meet all of Scottish Water’s electricity needs.

‘In Scottish Water Horizons we intend to deliver 90 Gigawatt hours (GWh) per annum of new renewable generation by 2030 to help Scottish Water on its journey to meeting its net zero carbon goal.”

The inclusion of electric vehicle charging points is designed to help accelerate the wider roll out of charging infrastructure across Scottish Water sites.

“It’s a great step forward that we can now generate a significant proportion of the electricity we need within the site, using renewable resources.

“We are really proud that our water treatment works at Loch Ashie is playing its part in helping Scottish Water achieve its net zero carbon ambitions.”

“Looking to the future, the inclusion of electric vehicle charging facilities will support faster progress with moving our 1600-vehicle fleet of vans and tankers all over Scotland away from fossil fuels towards clean electricity.”