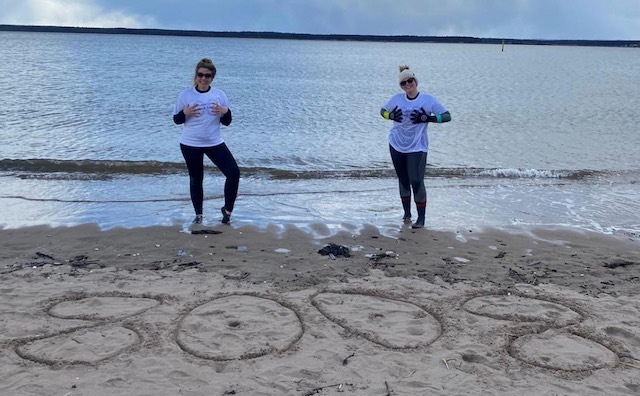 From Dundee to Dubai and New York to New Zealand, Jog for Jugs – the new charity campaign that launched on Saturday – has captured the imaginations of social media users across the globe.

With over 40,000 views in just 24 hours, the tongue-in-cheek launch video, starring a host of Scottish celebs including Lorraine Kelly and Emma Louise Connelly, has been shared far and wide as participants helped spread the word to raise breast cancer awareness.

Jog for Jugs’ original target of £1000 for breast cancer awareness charity CoppaFeel! was smashed in under two hours of the campaign going live, and the team has now upped the ante by aiming to reach £8008 (to represent ‘BOOB’) within the next four weeks.

The campaign has been a labour of love for a group of ‘boomerang buddies’ who have temporarily moved back to their hometown of Dundee after over a decade of living elsewhere, to support each other, friends and family through the pandemic.

During lockdown, Becky Chapple (28), a Regional Manager for Amazon, received the unfortunate news that her mum Susan had been diagnosed with breast cancer.

Thankfully, the signs were caught early, and swift treatment has meant that her future looks bright.

However, after researching the disease over the course of her mum’s treatment, Becky discovered that 1 in 8 women will develop breast cancer in their lives, and that regardless of gender everybody should be checking themselves regularly.

Becky and her friends devised the Jog for Jugs campaign to shine a spotlight on the issue and to help reduce the stigma of talking about boobs.

Participants in the campaign are encouraged to jog/walk/cycle/swim/SUP (any way they can move their body) 8km, to donate £8 to the dedicated JustGiving page and to nominate 8 pals to do the same and – most importantly – to share a ‘check yourselfie’ on Twitter, Instagram or Facebook with the hashtag #JogForJugs, to represent getting into the habit of regularly checking boobs or pecs for concerning changes.

The campaign is particularly timely due to the recent news that 2 in 5 people have been too scared to visit their doctor due to Covid-19, and CoppaFeel! is deeply concerned that this will result in a flurry of late-stage diagnoses once lockdown restrictions are fully lifted.

“Those who know me know that I am very rarely lost for words, but on Sunday evening as I reflected on all of the craziness and kindness of our launch weekend, I was genuinely speechless.

“Our close-knit Jog for Jugs committee has been working on the campaign development for a couple of months now and we all thought we had a nice concept.

“However, we couldn’t have imagined that it would reach so many people in so little time.

“Our minds are totally blown and there aren’t enough words in the world to convey my thanks to each and every person who has donated or spread the word about Jog For Jugs so far.

“After such a challenging year for everyone, it really does show that light can come from the darkest of places.

“Our ambitious new target of £8008 would make such a tangible difference to the fabulous folks at CoppaFeel! who have suffered from a dip in donations due to Covid-19.

“I hope, with a lot of help from our friends, that we can achieve it.’

To donate to the Jog for Jugs Campaign please click here