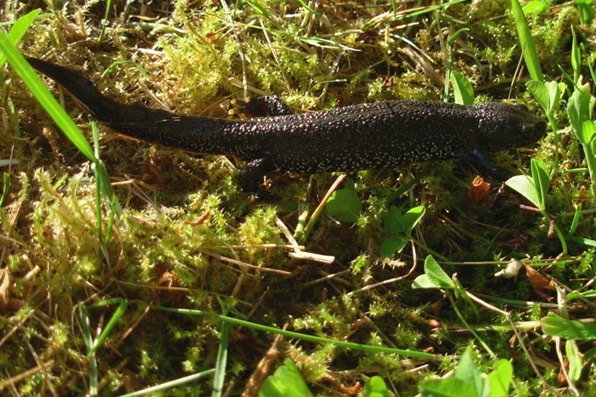 A European Protected Species – the endangered Great Crested Newt (Triturus cristatus) – has been given a boost at its most northerly UK outpost thanks to Forestry and Land Scotland’s creation of a pondscape in a Strathpeffer woodland.

Created over the course of around four years with the advice and guidance of local experts, Katie O’Brien and her father David, the ‘pondscape’ developed out of work carried out in 2012 to lower water levels in an existing pond so as to comply with reservoir management regulations.

Pond before works to extend it were carried out.

Creating more ponds helped with the initial problem but also provided an opportunity to safeguard a population of Great Crested Newts, which in the original pond had been under constant threat from non-native fish species that would eat the eggs and juvenile newts.

Katie, who discovered the latest colonisation while on a lockdown exercise outing, said;

“We’ve been involved with this project from the beginning providing advice on habitat creation and on population monitoring, and making the initial recommendations on suitable pond sites.

“Creating new ponds gave the existing population a chance to grow but success also depended on the newts having over-wintering places (‘hibernacula’), such as log piles and dry-stone walls, as well as foraging areas and dispersal corridors, such as woodland.

“All of the hard work and effort really paid off and it’s really satisfying to know that as well as providing homes for Great Crested Newts, the ponds have healthy populations of other amphibians such as the common frog and palmate newt.”

The great crested newt is the largest of three UK species and is named for the crest along the back of the adult males.

Although distinctive, they are largely nocturnal and are rarely encountered.

Pond once work was completed.

Breeding in ponds through spring and early summer where females lay their eggs individually on vegetation.

There are fewer than 50 known breeding ponds in the Highlands, with over 20% being on land managed by FLS.

As well as benefitting amphibians, the ponds provide the added benefit of reducing water run-off and flooding.

They also help to purify water as sediment settles in ponds and aquatic plants trap, breakdown and transform pollutants, toxins and heavy metals present in water.

“Around the world, most of the world’s 8000 or so species of amphibians are decline and projects like this show how straightforward conservation action can boost local populations.

“Being laid off from work, I’m glad to have such an array of nature and beauty on my doorstep during Corona lockdown.

“The spread of these amazing creatures is a Scottish conservation success story.”