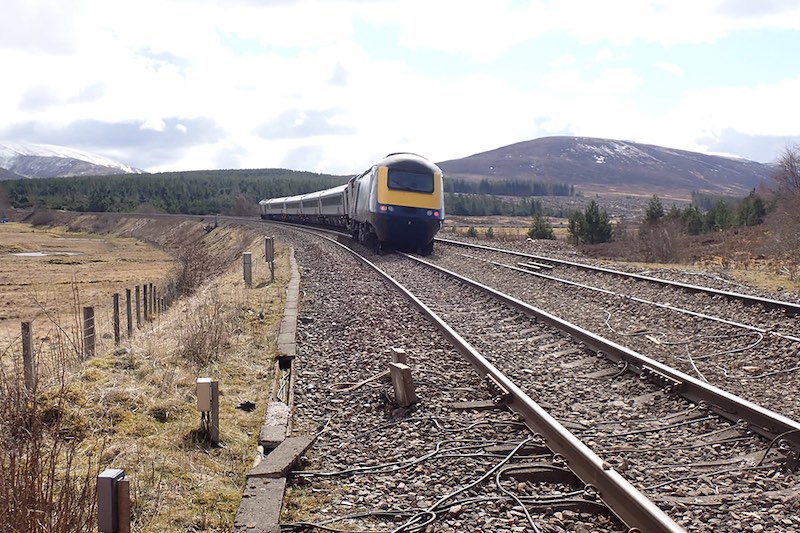 RAIB has today released its report into a wrong side signalling failure and derailment at Dalwhinnie, Badenoch and Strathspey, 10 April 2021.

At around 03:01 hrs on 10 April 2021, an empty coaching stock train derailed at around 33 mph (53 km/h) after being wrongly diverted from the main line onto a crossover south of Dalwhinnie station, Badenoch and Strathspey.

No one was injured.

The train was wrongly diverted because, even though the signaller had recently called the double-ended set of points to be in a position for the route along the main line, the points at the facing end of the crossover had remained set towards the crossover, while the points at the trailing end had moved to the correct position.

The signaller was able to clear the protecting signal, which allowed the train to approach the crossover in this condition, because of a wiring error in the signalling system that was introduced when the point machine at the trailing end was replaced some nine months earlier.

The front of the train was directed over the crossover and then trailed through and forced apart the points at the trailing end.

The signalling system only then detected that the points were not correctly set and automatically re-sent a command for both point ends to move to the position that the signaller had earlier commanded.

This caused the points at the facing end to move under the train, which derailed the rear of train as it passed over them.

The wiring error was the result of two unwanted conductors, a wire strap and a metal link, within the replacement trailing end point machine.

These conductors were only required when this type of point machine was installed at single-ended point locations.

The local signalling maintenance team was responsible for installing and testing the replacement point machine.

The team did not appreciate that the crossover at Dalwhinnie was unique to the area and that, because of the design of the point position detection circuit that the two point machines shared, these conductors needed to be removed from the point machine when it was installed.

The need to alter the internal wiring was not identified when the renewal work was planned.

The point machine was tested and commissioned following processes that Network Rail prescribes for signalling maintenance work when installing a like- for- like replacement.

The checks and wire counting that were required before and after the point machine was installed did not identify the wiring discrepancy.

The last opportunity to identify the wiring error before the points were handed back into service was an out-of-correspondence test.

However, the specified testing work was interrupted by the need to wait for the signaller to arrive at the signal box.

As a result, this and other outstanding testing work was overlooked, the tester in charge believing that it had already been completed.

RAIB found a lack of clarity in Network Rail’s signalling maintenance standards concerning the working arrangements of the appointed tester and of those carrying out this type of like-for-like installation work.

It has identified this as a probable underlying factor.

RAIB has made five recommendations directed to Network Rail covering:

the definition of the tasks and responsibilities of its signalling maintenance teams when carrying out pre-planned like-for-like equipment replacement work, and how the independence of testing and installation roles is best assured

the provision of information and warnings for replaceable items of signalling equipment, and the effectiveness of pre-installation checks

the arrangements for recording the progress and findings of signal maintenance testing.

“Some of the causes of the accident at Dalwhinnie bear an alarming similarity to those found in the multi-fatal accident at Clapham Junction in 1988, and the more recent collision at Waterloo in 2017 which caused huge disruption on routes into London.

“These accidents share a common theme, that an undetected wiring error resulted in the failure of the signalling system.

“At Dalwhinnie, this meant that the signalling system did not detect that some points were in an unsafe position, resulting in the derailment of a train.

“Thankfully no one was injured.

“However, the train could have been carrying passengers and travelling at a much higher speed, and the outcome very different.

“Wiring within a signalling system is safety critical and needs to be carefully checked and tested when engineering work is carried out.

“It is essential that long-established processes and assurance principles, introduced and developed as a result of earlier accidents, are followed.

“When essential technical information is not readily available, and testing is not completed or carried out in a truly independent manner, the consequences can be very serious.

“Those who don’t remember the past are condemned to repeat it, has been said in many ways by many people.

“When it comes to fully understanding the importance of hard-learned lessons around the wiring of railway signalling, the accident at Dalwhinnie needs to act as another salutary reminder to the industry.”