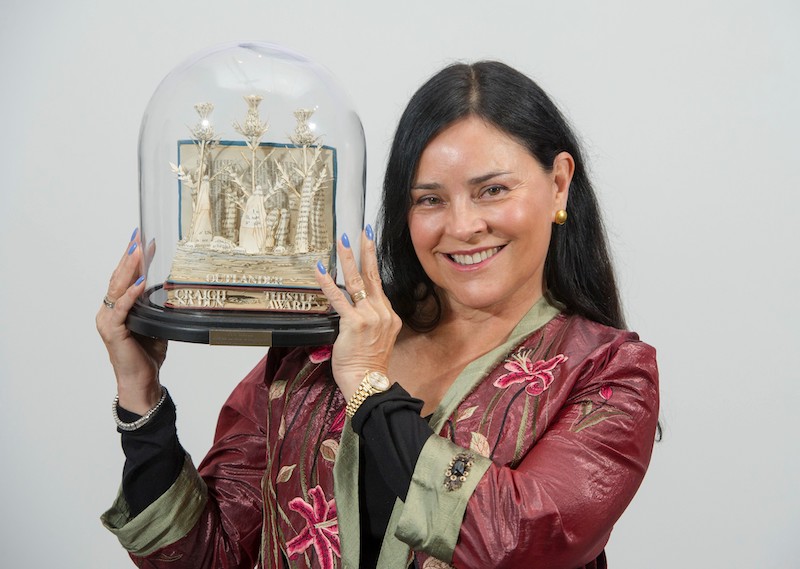 Outlander author Diana Gabaldon says she was “enchanted” by Inverness on her first visit to the city and could see herself living there, in an exclusive video by VisitScotland released to mark the premiere of Outlander: Season 5.

The writer, who hails from Arizona in the USA, recalls her visit to the capital of the Highlands almost 30 years ago, in the video entitled Diana Gabaldon’s travels in Scotland.

Its release coincides with the latest season of the television adaptation of Outlander which premiered on 17 February on Amazon Prime in the UK.

In the interview, Ms Gabaldon tells the national tourism organisation, Inverness reminded her of her hometown when she first set eyes on it during her Scottish travels in the early 1990s.

“We went to Inverness and booked into a small hotel on the river and we were just enchanted by that.

“It’s got a very peaceful vibe to it.

“I grew up in a small mountain town, Flagstaff, Arizona, and Inverness has much the same feel about it.

“I wouldn’t mind living there.”

Diana Gabaldon’s travels in Scotland was filmed at Hopetoun House near South Queensferry, in the wake of the author picking up her “International Contribution to Scottish Tourism” award at the Scottish Thistle Awards, for the Outlander Effect.

Sitting in the library of the 17th century stately home, Ms Gabaldon describes visiting Scotland for the first time with her husband while researching the second book in the series, Dragonfly in Amber.

The couple visited Edinburgh during the summer festival and stayed in Dundee where she recalls a humorous moment of “Scottish genteel hospitality” with a local police officer.

She talks about her time on Orkney, visiting Smoo Cave in the Highlands and exploring the Jacobite site of the Battle of Sheriffmuir in the Ochil Hills, Clackmannanshire.

Ms Gabaldon never visited Scotland whilst writing the first Outlander book, published in 1991 as Cross Stitch in the UK, and used her skills as a researcher to create an accurate picture of the Highlands in the 18th century.

“Because Scotland is so beautiful, there is an immense amount of pictorial stuff.

“Back then, it was VHS video tapes, but there were also picture books and magazines, so I knew what Scotland looked like.

“I was quite surprised when I got here to find it was even better than it looked in the photographs.”

A further seven novels and nine spin-off books have been published in 43 countries and in 39 languages, selling more than 35 million printed copies worldwide, and in 2014, Outlander was adapted for television by Sony Pictures Television.

Outlander follows the romantic adventures of English World War II combat nurse Claire Randall, who travels back in time to 18th century Scotland where she meets and falls in love with Scottish Highlander, Jamie Fraser.

The Outlander Effect & Tourism paper, published by the tourism body’s Insight team, has been revised with film location visitor numbers divided by season to give a clearer picture of its impact.

The paper reveals that attractions used in the popular television adaptation of her famous novels have seen visitor numbers rise on average by 40%, from the year before their appearance on-screen.

“Diana’s Outlander stories and the TV series have had a huge influence on fans deciding to visit Scotland and in our exclusive video the award-winning author reveals her own visitor experience and the places she holds dear.

“We’re continually amazed at the effect Outlander has had on Scotland and would encourage fans who haven’t ventured to our shores to do so, where they can walk in the footsteps of Claire, Jamie and even Diana herself.”

This year the University of Glasgow is set to host a major conference to look at the history, customs, politics, culture, clothes and music featured in the Outlander TV series.