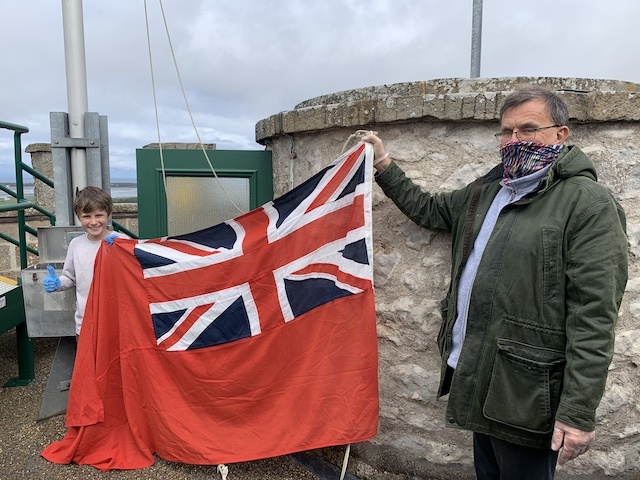 A nine-year-old boy stood for over an hour in the rain to make sure he was the first person to visit a north-east monument after it re-opened for the first time since the Coronavirus pandemic hit.

It had not been open since it closed for the season in September 2019.

And Teddy Gadalla who was a regular visitor to the Tower before the pandemic made sure he was first in the queue.

“I was very excited when I found out it was opening.

“I used to visit it every other week and I have missed it.

“I still came up to Cluny Hill whilst the Tower was shut, but I was excited to be able to go up the Tower again.”

Teddy who attends Drumduan School visited the Tower with his grandma Nahed Gadalla and she added:

“I got a call from his mum saying he was excited about it re-opening so he dragged me up the hill. He wanted to make sure he was first so we came up early.”

Teddy and his grandma climbed the Tower with Forres Heritage volunteer Michael Ellison who also allowed him to help raise the red ensign which signified that the Tower is open.

Despite standing in the rain to secure his spot, the sun shone once Teddy reached the top of the tower.

“I have been volunteering with the Trust for four years.

“It’s great to be able to help people see the view and share the Tower’s history.

“It was also great to arrive on re-opening day to a steady queue of people.

“It was quite emotional raising the flag for the first time in almost two years.

“I am delighted that Nelson’s Tower is open again.

“It was great to see a queue of people waiting for the doors to open and the Heritage Trust volunteers so happy to welcome visitors back.

“Visit Moray Speyside were pleased to support the Trust and its volunteers to re-open one of the most prominent visitor attractions in Forres.”

The Forres Heritage Trust is using the Moray Speyside Check & Protect app to securely check in visitors with one simple sign-on.

The tourism organisation also supported the Trust with advice on how to re-open safely.

The Tower which stands on Cluny Hill in Grant Park will open Friday to Monday 2pm-4pm until the end of September.

To find out more about Nelson’s Tower and volunteering with the Trust please click here.