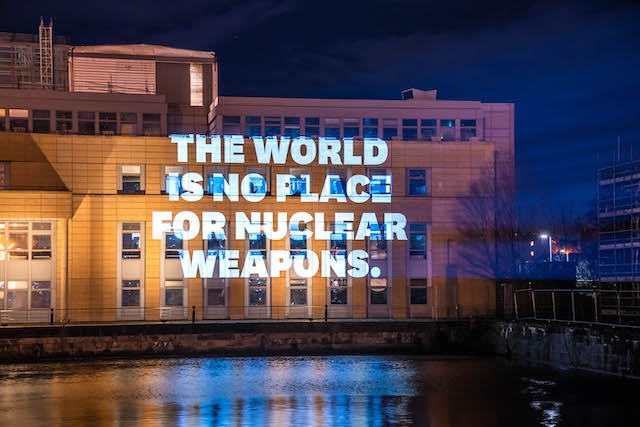 Campaigners have reacted with distress and anger at the news that the UK has decided to increase the number of nuclear bombs it deploys and stockpiles by 40%.

In the last two decades the UK has gradually reduced the number of warheads to around 180, claiming the reduction as a sign of a good intention to fulfil its obligation under the Nuclear Non-Proliferation Treaty (NPT) to take genuine steps towards disarmament.

Critics have pointed out that reducing the number of nuclear bombs to a point where you are still able to inflict devastation at over a thousand times that unleashed on Hiroshima 75 years ago, and at the same time modernising the system, is not a genuine step towards disarmament.

Now the UK will in fact increase the number of warheads to 260, a move at odds its policy hitherto of claiming to regard the NPT as the “cornerstone” of the global disarmament framework.

“What neo-colonial delusions and swaggering machismo goes from building ‘a better Britain’ to investment in more nuclear weapons -good for agonising mass death and poisoning for all living things but nothing else.

“Forget the old think of ‘deterrence’ the majority world is moving on.

“Commitment to more nuclear weapons is dangerous nose-thumbing at the Non-Proliferation Treaty (NPT) which some state actors regard as potentially dovetailing with the UN Treaty for the Prohibition of Nuclear Weapons.

“Rather than negotiations towards cessation of the nuclear arms race as the NPT requests, our government is starting its own.

“The climate emergency, the pandemic and the Brexit catastrophe require a focus on real security achieved by reducing inequalities and working to heal environmental and social harms – nuclear weapons are the antithesis.”

Following this news and as the Scottish parliamentary election looms, the rift between Westminster and the Scottish Government in regard to the UK’s WMD arsenal is set to widen.

When the Treaty on the Prohibition of Nuclear Weapons entered into force as international law on the 22nd of January Scotland’s First Minister said:

“While the Scottish Government is unable to become a Party to the Treaty, as First Minister I strongly support the principles of the Treaty and the work of the Women’s International League for Peace and Freedom.

“An independent Scotland would be a keen signatory and I hope the day we can do that is not far off.”